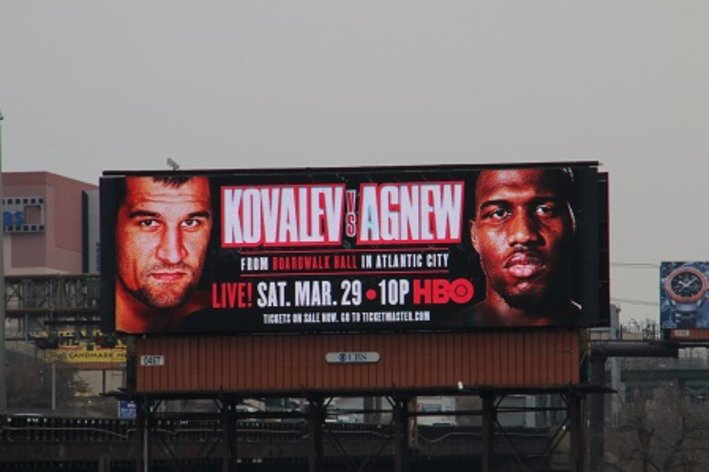 Sergey Kovalev will headline an HBO bill for the first time on March 29, but the extra attention isn’t getting to the WBO light heavyweight titleholder.
Sergey Kovalev has fought twice on HBO, once via tape delay and once live, but he’s never headlined on the network or on any network larger than NBC Sports. Until now, that is. Kovalev will be facing Cedric Agnew in the HBO main event on March 29 in Atlantic City, and though he’s got that and a lot of media hype around a potential fight against Adonis Stevenson swirling around his head, his team says he’s staying the course and operating as usual.

“Once a fighter becomes more comfortable with his status as a world champion, some can be tempted to lose focus and get distracted by all the attention,” promoter Kathy Duva of Main Events said. “He can’t always walk down the street without being recognized anymore, but luckily Sergey has managed to stay focused on Agnew and winning on March 29th.”

Kovalev (23-0-1, 21 KO) smashed both Nathan Cleverly and Ismayl Sillakh in prior HBO appearances, whetting the boxing world’s appetite for a clash with Stevenson (23-1, 20 KO), another powerful, elite light heavyweight at the moment, and the true champion of the division, as well as the WBC titleholder.

But that’s not next, and with the way the media hype between the two has gone, with back-and-forth trash talk, it may not be happening any time soon.

Trainer John David Jackson says that Kovalev isn’t having trouble staying focused. “Sergey is on course,” Jackson said. “He is a really hard worker. He is definitely training hard for this fight. He is doing what he is supposed to do.”

With HBO cameras on hand for training camp, Jackson says Kovalev hasn’t had any negative reaction to the added attention as he prepares for the fight. “He probably loves it. They stay out of our way so it is just like any other training camp.”

Kovalev himself said, “I am already used to them being there. They don’t bother me at all.”

Agnew (26-0, 13 KO) is a largely unknown fighter, with no marquee fights to his credit. The 27-year-old from Chicago last fought in April 2013, beating Yusaf Mack at Four Winds Casino in New Buffalo, Michigan, which having been there myself, I can tell you isn’t exactly the mecca of boxing.

“The key to this fight for Sergey is to be more strategic offensively,” Jackson said. “There isn’t much film on Agnew but we are approaching this fight like we do all the others. Sergey will do his thing.”

Kovalev, as usual, kept it short. “I feel good. Everything is normal. I feel no pressure and everything is going by the book.”