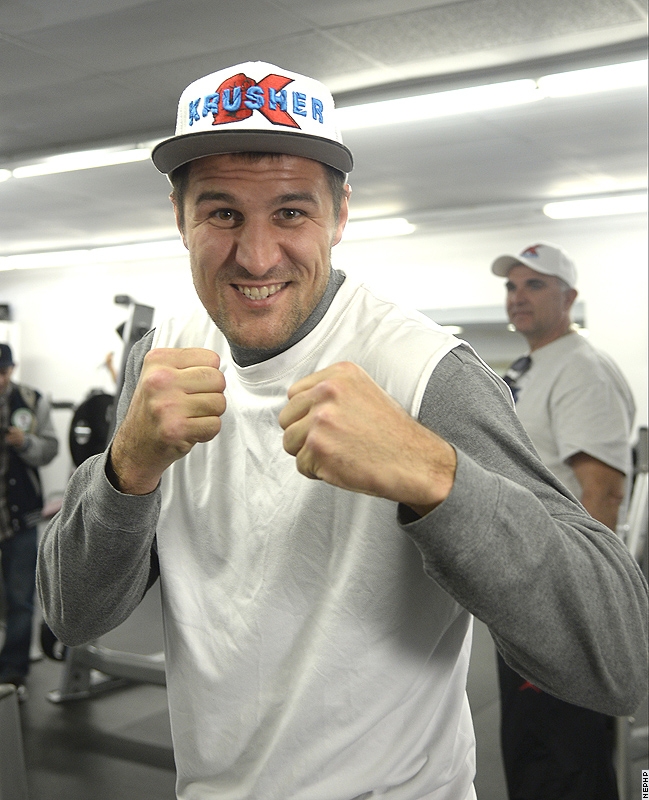 Sergey Kovalev and Nadjib Mohammedi prepare for a clash in Vegas Ruslan Provodnikov did it. So did Evgeny Gradovich. Even Gennady Golovkin followed through.

Like the aforementioned fighters, Sergey Kovalev has become the latest fighter from a former Soviet bloc country to call Southern California home.

The weather may be a reason but Southern California has become a hub in which elite fighters receive the best sparring and work with some of the best trainers in the sport.

Kovalev will be in Big Bear Lake, Calif., preparing for his light heavyweight title defense on July 25 against IBF mandatory challenger Nadjib Mohammedi at the Mandalay Bay Resort and Casino in Las Vegas, Nev.

The bout will be televised live on HBO.

Kovalev’s upcoming fight will mark a few milestones. It will be the first time he will headline a major card in Las Vegas and his first fight under a new contract with HBO.

“It is his intention and our intention to remain with HBO for the rest of his career, if that is possible,” said Main Events promoter Kathy Duva while addressing an assembled media on Saturday afternoon. “This is the company that has led boxing for the last 30 odd years in this country. It is unquestionably the number one boxing network in the world. It is the place to be if you want to have a high-profile career in this sport and maintain it for a long time.”

Kovalev (27-0-1, 24 knockouts) has mostly fought on the East Coast and Canada in recent years. Compared to Atlantic City, NJ., where he has fought three of his last four fights, the move west makes sense.

Duva confirmed her meeting with Richard Sturm, head of the MGM Grand Entertainment and Sports, who had expressed high interest in having the Russian fight on any of the properties on the Las Vegas Strip, including the MGM Grand and Mandalay Bay.

“I had a lovely meeting with Richard Sturm at MGM a few weeks ago,” said Duva. “He confirmed to me that MGM Grand and Mandalay Bay want to be in the Sergey Kovalev business. As I see a vacuum opening up in Vegas for big names, I think Sergey Kovalev is the kind of guy who can step in there and fill that vacuum. His fights are electrifying and exciting and thrilling. That is what boxing fans should expect when they put their money down to come and see a fight.”

Kovalev’s fights are indeed thrilling and exciting, including his last fight on March 14, when he stopped former RING light heavyweight champion Jean Pascal in the eighth round.

While possible fights with current RING champion Adonis Stevenson and Andre Ward loom on the horizon, Kovalev’s only focus is on Mohammedi, who has won his last 13 bouts in a row.

“I am happy and I am going to be best in my division,” said Kovalev, who will also be defending his WBO and WBA light heavyweight titles. “I am not finished of my collection of all of my belts. I shoot and I must get one more, the WBC title. Just give me opportunity to fight against WBC champion. I don’t care whether it be Adonis Stevenson or another guy. I don’t care. Right now I am not even thinking about this because my next fight will be big fight and not an easy fight against Nadjib Mohammedi.”

Mohammedi (37-3, 23 KOs) will be fighting in the United States for only the third time. This will be his attempt at a major world title belt.

While some in boxing wonder whether Mohammedi warrants the credentials to be the IBF mandatory challenger, Duva believes the fighter from France has earned that opportunity.

“[Mohammedi] earned his shot at a title by becoming the number one contender. He has worked hard over the last year to maintain that position and prepare himself for the opportunity to fight for the world title. Now he gets the privilege of fighting for all three of those belts.”

“The only thing I can guarantee you is that on the 25th of July, Nadjib Mohammedi is going to make the 175-pound contracted weight limit. That will be a guarantee. Number two, he is going to come in there with a game plan that, if he does execute and he does listen to [trainer] Abel Sanchez, he has a very good shot at winning this fight.”