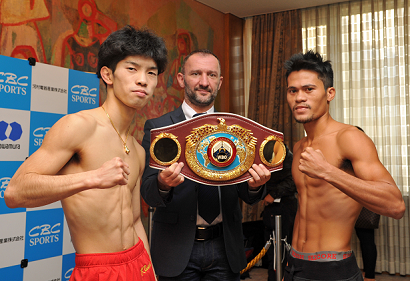 The first world title fight to take place tomorrow comes from Aichi and will be aired on CBC and TBS.

On the scales both were very similar weighing in around 104¾lbs, well inside the divisional limit, and both looked in fantastic shape.

For Tanaka the weight is lighter than he was last time out, in his title winning performance against Julian Yedras, but was the same as he was against Ryuji Hara in his OPBF title win last year. For Saludar the weight is his lightest so far, and shows how much he has prepared for this one, the biggest of his professional career by far.