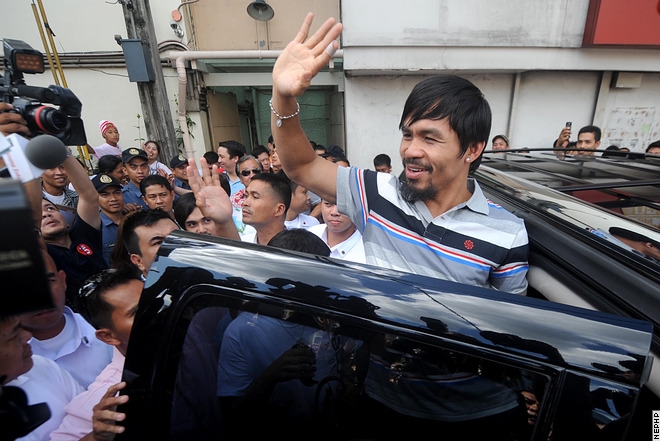 After the holidays, Michael Koncz, adviser to WBO welterweight champion Manny Pacquiao, plans to sit down with the Filipino superstar to discuss his next opponent. There are two viable options, WBC welterweight champion Floyd Mayweather Jr., who returns on May 5 in Las Vegas, and WBA/WBO lightweight beltholder Juan Manuel Marquez.

Pacquiao fought Marquez for a third time on November 12th, winning a close twelve round majority decision. Because of the close and controverial nature of the outcome, there is pressure to stage a fourth meeting with Marquez. However, there is also mounting pressure to fight Mayweather on the already scheduled May date at the MGM Grand.

Since the fight with Marquez, Koncz has not discussed any boxing related matters with Pacquiao, who returned to Manila earlier this week. The boxer is spending time with his wife and kids and doesn’t plan to discuss his next fight until after the holidays, Thanksgiving and Christmas, are over. Once the holidays are over, Koncz and Pacquiao will discuss all of the lucrative options – Mayweather, Marquez and whatever else is on the table. But, even Koncz admits Mayweather and Marquez are the two most lucrative options for Pacquiao’s next fight. Based on their discussion, Koncz will speak with Top Rank’s CEO Bob Arum.

“Honestly, there’s been no discussions with Manny about boxing and we don’t plan to discuss the opponent [for 2012] until after the holidays,” said Koncz to AKTV. “[Pacquiao and his wife Jinkee] are having some quality time together.”