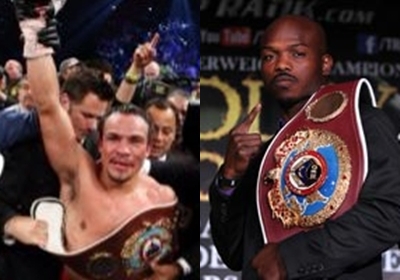 Juan Manuel Marquez Does Not Expect The Same Bradley Four division world champion Juan Manuel Marquez (55-6-1, 40KOs) does not expect the same Timothy Bradley (30-0, 12Kos) that fans saw in March against Ruslan Provodnikov. In that particular fight, the WBO welterweight champion stood toe to toe with Provodnikov. He took a lot of punishment and nearly got himself knocked out several times in the contest.

Marquez feels the other Timothy Bradley will show up. The Bradley who boxes and uses speed to his advantage.

Marquez-Bradley is set for September 14th at the Thomas & Mack Center in Las Vegas.

“No, I don’t think he will [fight me like he did Provodnikov],” Marquez said. “He has an elusive style, a style consisting of speed and I think it’s going to be a great fight for the fans. Bradley is the champion, a very tough fighter and if we win we will be beating another great fighter. If we were to lose, and we never have that on our mind, but we would be losing to another great fighter. It will be a great event and it takes place on an important date for Mexicans in the United States and here in our country.”