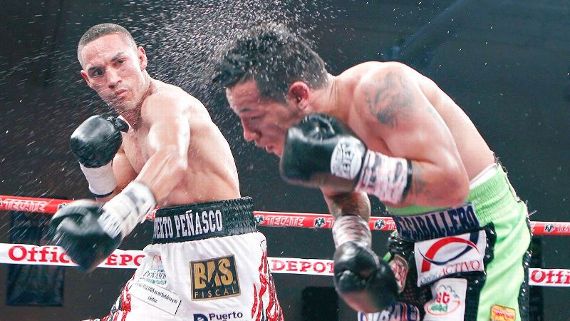 MEXICO — Juan Francisco “Gallo” Estrada retained his flyweight title for the fifth time by knocking out Hernan “Tyson” Marquez in the 10th round before a packed convention center in his native Puerto Penasco, Sonora.

Estrada (33-2, 24 KOs) — who showed why he should be considered among Mexican boxing elite and an elite member in the lower weight classes — floored Marquez four times between rounds six and seven, and then three more between rounds nine and 10, fulfilling his promise to top Tyson, who was only competitive in the first four rounds and then just tried to survived.

During the first third of the fight, Marquez (39-6-1, 28 KOs) hinted that he wouldn’t be an easy target, throwing accurate punches in the first three rounds which forced Estrada to go into counterattack mode against his countryman. After four rounds.

After four rounds, Estrada’s superior physical condition and his boxing skills allowed him to frustrate Marquez, who unsuccessfully tried to force his punches. Estrada looked stronger throughout the fight landing powerful combinations on Marquez’s head and body.

In the fifth round, Estrada started to take control of the fight while Marquez was showing signs of fatigue, due in part to a struggle to make the 112-pound limit after two years since he fought in the division.

Marquez hit the canvas twice in the sixth round but miraculously was able to finish the round in which he taunted he was going to stop Estrada.

It was then a matter of time. In the seventh, Marquez went down once again as Estrada pounded on him, but survived the attack more with courage than any physical conditioning.

In the ninth, Estrada went full force and sent Tyson back to the mat but couldn’t finish him. Estrada dropped Marquez twice in the tenth before referee Ramon Pena stepped in and called it a match.