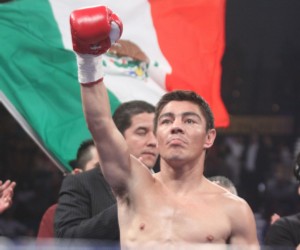 MEXICAN Jorge Arce has accepted the challenge of World Boxing Organization (WBO) super bantamweight titleholder Nonito “The Filipino Flash” Donaire Jr. that could possibly takes some time in May or June.

In response to Donaire’s challenge, the 31-year-old Arce (59-6-2 win-loss-draw card with 45 knockouts) also told the 29-year-old Filipino, who recently beat up Wilfredo Vazquez through a 12-round split decision that he’s not Manny Pacquiao.

“It’s a highly anticipated fight [against Donaire],” Arce, the present WBO bantamweight champion, told writer Salvador Rodriguez of boxingscene.com over the weekend. “The people are asking for it because Nonito beat Vazquez, the fighter I knocked out.”

Arce, who will fight on February 18 against Lorenzo Parra in a non-title bout in Mexico, said that he would put Donaire back where he really belongs. If Arce comes out victorious, he will immediately move up to the super bantamweight class to face Donaire. “I’m not impressed with the way he fights. I have the style to beat him. He says he’s the best of the division and I just say that I’ll beat him. I will demonstrate that he’s not the monster that they say and not a successor to Pacquiao,” Arce told Rodriguez.

But Donaire (28-1 with 18 knockouts), who is now a four weight division champion from flyweight, super flyweight, bantam to super bantamweight, reiterated his claim that Arce won’t beat him.