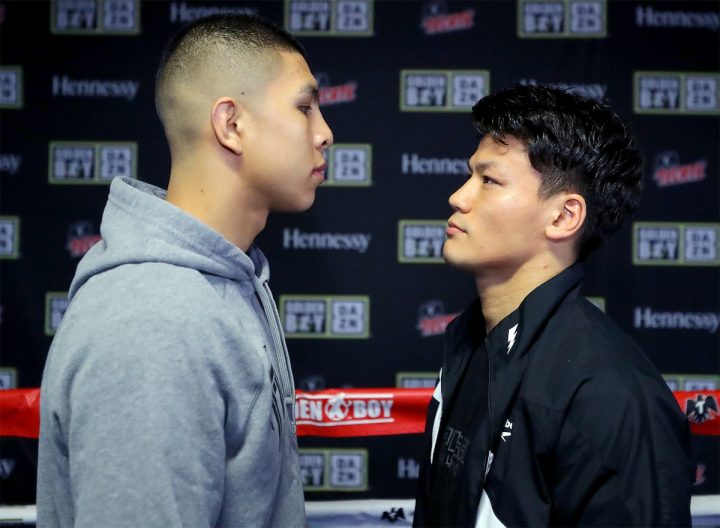 Mexican warrior Jaime Munguia (31-0, 26 KOs) and Japanese contender Takeshi Inoue (13-0-1, 7 KOs) hosted a media workout today at The Knockout Factory in Houston, Texas ahead of their 12-round battle for Munguia’s WBO Junior Middleweight World Title. The action will take place on Saturday, Jan. 26 at the Toyota Center in Houston, Texas and will be streamed live on DAZN – which is just $9.99 per month after a one-month free trial. Fans in Houston can purchase tickets starting at just $25 at ToyotaCenter.com.

Undercard fighters from the event also participated in the workout. Below is what today’s participants had to say at today’s workout:

JAIME MUNGUIA, WBO Junior Middleweight World Champion:
“I’m really happy to be here in Houston and happy to see how they treat me here. I’m ready to defend my title and give a great fight to my fans. Thanks for your support and I hope to give you a great show this Saturday.”

“There’s a lot of competition at 154 pounds. I’m willing to fight all of them. I’m happy to start the year off early. I fight when I’m told to fight, so I’m glad that I’m already fighting in January. If they put four fights in front of me for this year, then I’ll fight four times. I’m happy to be with the two best promoters of the world, Golden Boy and Zanfer promotions. I thank them for all the support they give me.”

TAKESHI INOUE, Junior Middleweight Contender:
“I’ve always idolized the U.S. since I was little and coming here, seeing the environment and food, I was born to fit into this environment. The jet lag is gone and everything is back to normal and I feel good. I’m in good shape. In the U.S., the focus on the fighters from media and fight fans are stronger than in Japan but what doesn’t change is my desire to win the fight and I’m going to keep that the same. I’m ready for Saturday’s fight.”