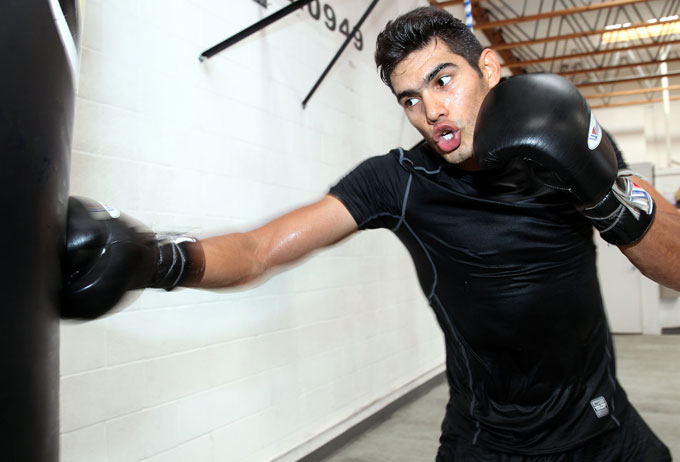 June 2, 2015,Marina del Rey,Ca. — Undefeated Mexican knockout artist and No. 2-world-rated super middleweight contender Gilberto “Zurdo” Ramirez works out for his upcoming all-action card which he will headline on Friday, June 26, at State Farm Arena in Hidalgo, TX. Ramirez will be taking on DERECK “The Black Lion” EDWARDS in a 10- round super middleweight bout which will be televised live on The MetroPCS Friday Night Knockout on truTV® at 10:00 p.m. ET. The live boxing series is presented by truTV and Top Rank®, and produced in association with HBO Sports®.
Promoted by Top Rank and Zapari Boxing Promotions, in association with Nord Boxing Promotions and Zanfer Promotions,
— Photo Credit : Chris Farina – Top Rank

Undefeated super middleweight contender Gilberto “Zurdo” Ramirez (31-0, 24 KOs) of Mazatlan, Sinaloa, Mexico is days away from his next fight as he will take on Las Vegas’s Derek “The Black Lion” Edwards (27-4-1, 14 KOs) this Friday, June 26, at the State Farm Arena in Hidalgo, Texas, in the TruTV main event.

We caught up with Ramirez during training camp as he talked about his plans and upcoming fight with Edwards.

“Right now we are having an excellent camp in preparation for Derrick Edwards,” Ramirez told Fightnews.com. The 23-year-old is currently training in the coastal city of Oxnard, California with his longtime trainers Hector and Jesus Zaparri in preparation for Edwards.

“We are training in various gyms finding the best sparring. Working in Oxnard has been great. There has been quality sparring there,” Ramirez said.

He is coming off a hard fought ten round unanimous decision win against Maxim Vlasov this past January in Colorado making his HBO World Championship Boxing debut. “My last fight with Max Vlasov was a tough one and I had a great experience,” Ramirez said.

Rated number two by the WBC, Ramirez is closing in on a world title shot.

“First thing is to focus on Derrick Edwards. If all goes well, this is the year where we want to get a title shot,” Ramirez said. “In my division there is lots of talent like Badou Jack, Arthur Abraham, there’s a lot of strong fighters and champions.”

Ramirez vs. Edwards will be a scheduled ten round super middleweight bout headlining the Metro PCS Friday Night Knockout series on TruTV.

“Expect a war in the ring from my part. I expect Edwards to come well prepared to give the fans a great show,” Ramirez concluded.