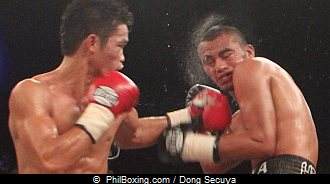 Photo by: -By Ronnie Nathanielsz –

Jason “El Nino” Pagara banked on a second round knockdown and flurries of combinations through most of the rounds to score a unanimous twelve round decision over resilient and fiercely competitive Mexican challenger Aaron “The Jewel” Herrera before a large crowd that enjoyed every moment of the action- packed card at the Waterfront Hotel and Casino in Cebu City on Saturday.

The “Pinoy Pride XX” fight  card of ALA Promotions staged in partnership with ABS-CBN packed a wallop not merely in terms of the action but also in the large number of foreigners present who clearly presented a new breed of fight fans in the highly successful series that turns in remarkable ratings nationwide on its telecast over ABS-CBN’s pre-eminent Channel 2.

Pagara started off with a right to the head and then a left hook but Herrera recovered behind a snapping jab and a solid right straight. After a furious exchange in round two Pagara caught the Mexican with a left hook followed by two right uppercuts that dropped the challenger who was given a mandatory eight-count by international referee Bruce McTavish but the well-conditioned Herrera survived Pagara’s onslaught.

Both fighters traded big shots with Herrera hurting Pagara with a left in round three before the Filipino champion nailed Herrera with a solid left hook followed by a right to the body.

Herrera took some of Pagara’s biggest punches and didn’t wince  but was clearly hurt by a three-punch combination in round six while a stinging right saw the sweat fly from Herrera’s head.

Showing hand-speed and good footwork, Herrera appeared to regain his composure in rounds seven and eight, connecting with his own power punches. A cut on the right eyebrow didn’t bother Herrera too much as Pagara tried to target the cut before Herrera came back strong and tagged the champion with a nifty left- right combination in round nine.

A Pagara left hook shook Herrera in round ten before the champion, his confidence growing, began to switch from the head to the body and although he caught Herrera with a vicious right hand the Mexican warrior refused to back-off.

Pagara also sported a bruise on his left cheek as both fighters went for a killer punch in the final round but neither was able to land a really telling blow before the final bell sounded.

Pagara who appeared to grow from a boy to a man in the ring is bound to improve his No. 4 world ranking by the WBO after his fine performance characterized by the fact that he didn’t fade in the championship rounds unlike in the past.

All three judges scored the fight for Pagara. Salven Lagumbay scored it 115-112, Tony Pesons had Pagara the winner by a wider 116-111 margin but the third judge, Arnie Najera’s  119-108 scorecard bordered on the ridiculous.

With the win Pagara improved to 31-2, 19KO’s while Herrera lost for the second time in his career to drop to 25-2 with 17 knockouts.