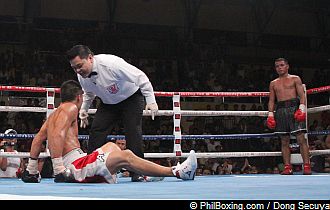 In a recent interview with the top trainer of Daniel “Canerito” Ruiz (27-5-19 KO) in Los Mochis Sonora, Mexico, Luis Gonzalez has expressed his boxer is ready to give Boom Boom Bautista the fight of his life.

Gonzalez is happy to have the opportunity for Ruiz to challenge for the WBO International Featherweight Title as the Co-Main Event of the World Title Championship of AJ Banal at Pinoy Pride XVII in Mall of Asia Manila October 20.

“Daniel will be in top shape coming to the Philippines. Daniel is fast and has a KNOCKOUT PUNCH”, we will go for the KNOCKOUT”, added Gonzalez.

“Daniel has fought in Canada and Australia, so fighting away from Mexico is not a problem. The fight from Canada is on You Tube and we were robbed in that fight. The International Boxing Organization World Title fight in Australia was another controversial fight. In the eighth round, the electrical power went out in the Arena and never came back on so the fight went to the scorecards.”

“We were assured that the Philippines and ALA Boxing Promotions are World Class in there boxing events. That is what we want. We are proud to fight in the land of Manny Pacquiao a great Boxing Champion.”

“Team Ruiz has studied the videos of Boom Boom and we will work on our strategy to defeat Bautista,” added Gonzalez.