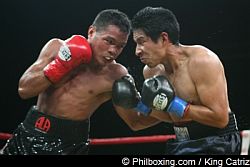 He’d better be true to his words of knocking me out or I might be the one who will stop him.”

With this stern warning, hard-hitting Boholano boxing sensation Rey “Boom-Boom” Bautista made known his intentions of beating Mexican Daniel Ruiz when they square off in the undercard of Pinoy Pride XVII: WBO World Bantamweight Championships on Oct. 10 at the SM Mall of Asia Arena in Bay City, Pasay.

Bautista was apparently pegged by Ruiz’s earlier statement that he will knockout the IBF International featherweight champion who has a record of 33W-2L with 25 KOs.

Bautista said that he has matured a lot after he went to a lot of ups and downs. “Thanks to ALA Boxing Promotions, they guided me and helped me stand up again after I almost quit boxing. Now that I am back, I will do my best to win titles,” added Bautista.

Bautista won his IBF belt after beating Mexican Miguel Angel Mendoza last December at the Hoops Dome in Lapu-Lapu City via sixth round knock-out while Ruiz lost his last fight to Australian Will Tomlinson in his bid to snatch the IBO Super Featherweight title.

Veteran trainer Editho Villamor who handles Bautista’s rigid training said: “We have been training for four months now and everything is going smooth, we already viewed some of Ruiz’s fight tapes and we have figured an affective fight plan aganst him.”