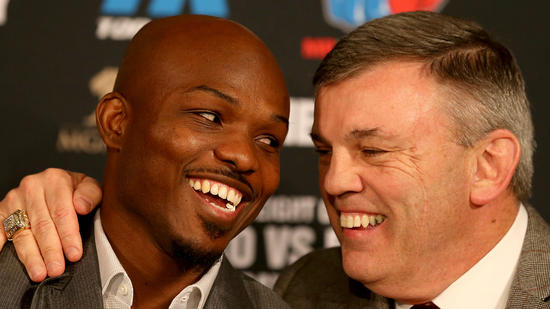 Teddy Atlas is obsessed with finding ways for his fighter, Timothy Bradley, to defeat Manny Pacquiao, and the proof of that exists on what he pulls from his pocket.

A large index card covered with scribbled notes, like “Block and move drill,” “Step and punch,” are the reminders to Atlas of what he needs to address and perfect during his training camp time in Indio with Bradley, the two-division world champion from Coachella Valley who’ll meet Pacquiao for the third time April 9 at MGM Grand in Las Vegas.

“I joke [about the index cards] that this is what you do when you’re born in 1956 … you remind yourself of things you don’t want to forget,” Atlas said. “They’re important. I know what I’m going to do already, but this will ensure it gets put out there. I thought I was the only one who did it. I did it quietly, privately. Then somebody said John Wooden used to do it, so I said, ‘I’m not in bad company.’”

Following Bradley’s disputed split-decision victory over Pacquiao in 2012 and Pacquiao’s convincing triumph in 2014, this is the once-beaten boxer’s first shot at the record eight-division champion with Atlas in his corner.

An ESPN analyst, Atlas was hired for Bradley’s November fight against former lightweight champion Brandon Rios, and Bradley’s improvements were evident as he picked apart the far bigger Rios and scored a ninth-round technical knockout.

Atlas has reinforced lessons, such as schooling Bradley that sometimes the best thing you can do in a corner is not throw a punch, but to wait and let a better opening emerge.

The pair spend quality time together before each workout sitting in a car outside the gym, talking boxing, making sure the thoughts that cross Atlas’ mind since the prior workout and land on the index card get addressed.

“I want to give Teddy Atlas praise after this fight,” Bradley said. “He’s one of a kind. I never came close to meeting a person — a trainer — like him. He’s like a second father, a special human being. I do think I’m going to win this fight, I really do.”

Atlas’ preparation for pushing his fighter to beat Pacquiao began with full respect for the challenge before them.

While Pacquiao turned 37 in December, hasn’t fought since his May 2 unanimous-decision loss to Floyd Mayweather Jr., and has undergone right shoulder surgery to correct an injury aggravated in that bout, Atlas is not banking on a lessened product.

“I don’t think [Pacquiao’s age and 11 months of inactivity] is part of it. I think it’s going to be the same physical talent we’ve always seen. Very explosive, the same combination of speed and power,” Atlas said. “He’s an uncommon athlete. Speed and power is very rare. That’s still going to be there. And he’s a lefty. He’s not diminished, not used up, not a shot fighter.

“And as far as motivation, it’s his last fight and he carries the pride and hope of the Filipino people on his shoulders. He wants to make sure he does that. If anything, he’ll be a more aggressive guy trying to prove his point in a lot of ways. We’ll be prepared for that. If I’m prepared for that, I haven’t missed anything, haven’t come up short on my responsibility for my fighter.”

There is an advantage Bradley has in fighting 24 prior rounds with Pacquiao, and Atlas has worked this camp to inspire his fighter about the value of that experience with another colorful analogy.

During the Rios fight, Atlas gained attention by barking to Bradley that he’s a “fireman,” unafraid of the heat of opposing punches, daring to find himself in harm’s way but smart enough to cover and land blows that can extinguish the opponent.

Bradley loved that exchange, and at a recent workout, local firefighters presented him with a new yellow fire helmet.

Pacquiao’s trainer, Freddie Roach, has sought to diminish the impact of Atlas, saying he doesn’t see much difference between this Bradley and the former version, saying that Rios was badly out of shape and seemed uninspired.

“I don’t care what that guy says. I think I know why he says it. I don’t think it’s for sincere or legitimate reasons. It doesn’t concern me,” Atlas said. “The thing that concerns me, the thing that burdens me every day — morning, noon and night — is not to fail my responsibility to this kid.”

For the Pacquiao fight, the buzzword has changed from “fireman” to “ferris wheel.”

“This guy’s iconic,” Atlas said of Pacquiao. “It’s like going to an amusement park the first day and you see this big ferris wheel. You saw it in books, your eyes are big, it’s as big as the sky, touching the clouds, going 100 miles per hour. You say, ‘Oh my God, look at that.’

“But then you get in it and by the time the ride’s over, it didn’t quite touch the clouds, it didn’t quite go 100 miles per hour and you realize it actually stops in spots. You can actually view and see things. That’s how we have to view Pacquiao. We have to see things now we didn’t see the first time we rode the ferris wheel.”

Still, Atlas said, Bradley’s past difficulties with Pacquiao need to be analyzed closely too.

“He’s done a lot of good things with Pacquiao, but he also has to recognize both sides of the coin and has to be able to see what should be seen,” Atlas said. “It’s obvious he comes at you in surges. What else is there to see? To take advantage of?”

It’s all on the index cards, then taught in the gym.

“The only thing I’m looking to is beating Manny Pacquiao,” Bradley said. “I’m just worried about 36 minutes, complete focus. Thirty-six minutes can change my life. History lasts forever. They can say, ‘This guy beat Manny Pacquiao solid.’ I want that legacy. His legacy is part of mine.”