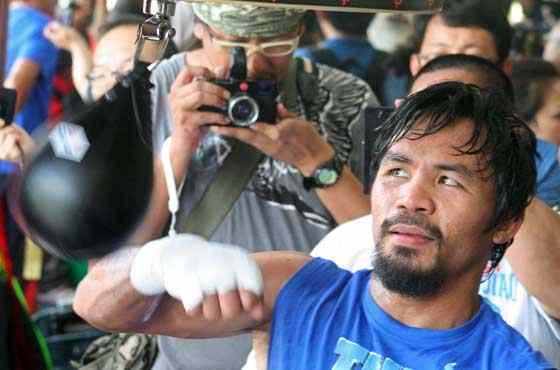 Manny Pacquiao returned to his usual best form after an eight-round sparring session last week at his own gym in General Santos as he preparers for his upcoming third bout against American Timothy Bradley on April 9 at the MGM Grand Arena in Las Vegas, Nevada.

One of Pacquiao’s assistant trainers, Jonathan Peñalosa, disclosed to The Manila Times that the former World Boxing Organization (WBO) welterweight champion Pacquiao had suffered stiff muscles in the early part of his training sessions last week.

But the 36-year-old Pacquiao finished the weekend of his sparring session on a high note.

“He (Pacquiao) suffered stiffness in some of his muscles, but he was able to finish his sparring session on a high note and everybody was satisfied including coach Freddie (Roach),” Penalosa, the brother of former world champion Gerry Penalosa, said during a phone interview.

“So far, he is in best form and he’s going to become better the following days.”

“Rhodes and Maduma sparred four-round each with Pacquiao,” he added. “Manny is becoming faster and stronger. I know he really wanted to knockout Bradley this time that’s why he’s doing his best in training.”

Penalosa though said that Bradley (33-1-1 win-loss-draw record with 13 knockouts) is also a tough opponent now for Pacquiao (57-6-2 record with 38 knockouts) after his two impressive wins.

“I just visited him (Pacquiao) and he looks really good in training. If ever Bradley decides to engage, Manny could knock him out. If not, the fight will go to 12-round and Manny will still win,” he said.