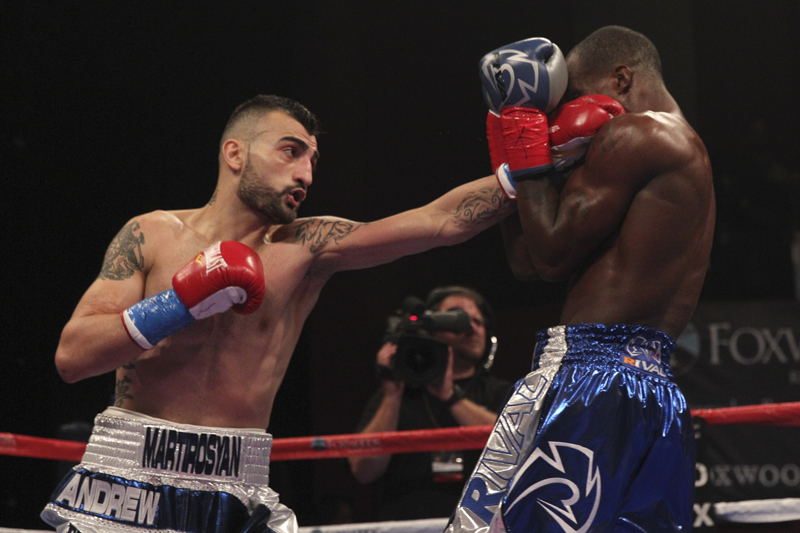 Mashantucket, CT (October 5, 2014) World ranked junior middleweight contender VANES “The Nightmare” MARTIROSYAN entered the top echelon of his division on Saturday night with an outstanding 10-round unanimous decision over fellow contender WILLIE NELSON from the Foxwoods Resort Casino and telecast live on SHOWTIME.

Changing the momentum of the fight in the second round with a big right hand and surviving a bad cut above his right eye suffered in the fourth, Martirosyan fought brilliantly over the second half of the fight.

With the clash hanging in the balance entering the 8th stanza, Martirosyan stormed away with hammering right hands and hard-hitting body shots to pull away from the taller Nelson.

After the fight the 28-year-old Martirosyan spoke about the recent passing of his promoter DAN GOOSSEN, head of GOOSSEN BOXING.

“This fight is for Dan, it was a hard week but in the 8th round I could feel his spirit and really hit my stride,” said Martirosyan. “I know he was looking down and watching and I’m happy to dedicate this win to him.”

Said TOM BROWN of GOOSSEN BOXING, “This was a big win for Vanes. When we signed him in January we were confident that he was one of the best junior middleweights in the world and tonight confirmed that.”

For his second straight fight the 2004 U.S. Olympian had esteemed trainer JOE GOOSSEN, Dan’s brother, in his corner.

MARTIROSYAN vs. NELSON will be replayed on SHO Extreme on Monday, October 6th at 10:00 p.m. ET.