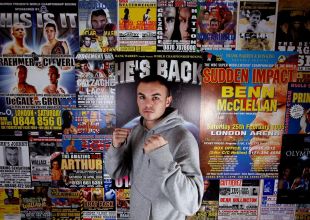 Kevin Mitchell will be forced to wait for his highly-anticipated comeback fight, but vowed to win a world title in 2012 after pulling through a nightmare year.

Mitchell was set to take on Stephen Ormond in a WBO Intercontinental Lightweight title bout in February, but the unbeaten Irishman pulled out of the fight, leaving Mitchell to look for a new challenge. Despite the setback, Mitchell says he is ready for whichever boxer decides to take him on after overcoming personal issues in the past 12 months.

“I think they know I’m in good shape and I’ve been back in the gym,” Mitchell told iFilm London. “Word’s probably got out that I’ve not had a drink over Christmas and that I mean the business. That’s probably put the fear factor into [Ormond].

“I’m ready. I’m prepared for anyone and I’ll be prepared for whoever they put out in front of me. It doesn’t matter who it is.

“I’ve been in very good shape so, whoever it is, I’ll deal with it in a great fashion. I knock anybody early, I can knock them out late – I’ve proven that in fights.

“I’ve given up drinking. I’ve given up messing around. I’m serious and I want to do a big job this year and turn into a superstar. It’s what I’ve always dreamed about. This year I’m going to smash it. Watch.”

Promoter Frank Warren has been in discussions with Mitchell about a July fight at Upton Park against Scotland’s WBO interim lightweight champion Ricky Burns as the 28-year-old plans the next step of his comeback.