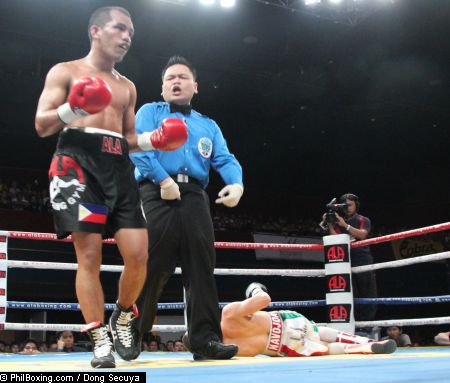 Melindo Pulverizes Esquer to Win by 7th Round TKO WBO Intercontinental flyweight champion Milan “El Metodico” Melindo of the famed ALA Gym pulverized Mexico’s rugged Juan Esquer to win by a 7th round TKO before a huge crowd at the Waterfront Hotel and Casino in Cebu.

Fight fans learned that boxing was more fun in the Philippines when they were treated to a ridiculous acting job by Esquer who got hit with a left that was on the lower end of his high-rise trunks in the dying seconds of the sixth round, went down, crawled all over the canvas in a show of agony, got up and fell down more than once as the crowd booed the Mexican who has a history of such antics in the ring, lustily.

Given a mandatory five minute break to recover, the Mexican came charging back in the final seconds of the round much to the delight of the fans and belying the pretense that he was badly hurt.

Early in round seven Esquer caught Melindo with a clear low blow that appeared to be intentional and then when he realized it was a lost cause and Melindo caught him with a left to the chest, he feigned a low blow before his corner decided to call it quits and referee Danrex Tapdasan ended the contest at 2:16 of the 7th round.

It was as classic a display of skill as the technically sound Melindo used his hand-speed, rapier-like jab and cracking double left hooks to the head and body alongside flurries of accurate punches to wear down the tough Mexican and retain his title. The impressive win set Melindo who is ranked No.1 by the WBO on a collision course against countryman Brian Viloria unless ALA Promotions president Michael Aldeguer is able to get Melindo a title shot against any of the champions from the other world organizations such as WBC champion Pongsaklek Wonjongkam, WBA champion Hernan Marquez and IBF champion Moruti Mthalane.

ALA Promotions president Michael Aldeguer told the Manila Standard that for Melindo to earn a mandatory crack at Viloria’s title he would have to fight a top-ten ranked fighter in his next bout which is what WBO president “Paco” Valcarcel told him at the last WBO convention in Puerto Rico. He also disclosed that Top Rank promoter Bob Arum had asked him about Melindo after we mentioned his name to Arum and Manny Pacquiao’s adviser Michael Koncz and they are exploring the possibility of Melindo seeing action against a top ten contender on the undercard of Pacquiao’s scheduled June 9 fight in Las Vegas.

Aldeguer said “you can’t hide from fighting Viloria if that’s what has to happen. It would be unfair to Melindo and to fight fans.” He cited the example of Mexico pointing out that Mexicans fight against each other for regional and world titles. That’s the nature of boxing.

Aldeguer also plans to send Melindo along with AJ “Bazooka” Banal to train under Nonito “The Filipino Flash” Donaire’s accomplished trainer Robert Garcia in preparation for his US debut.

Melindo set the tone of the fight in the opening round when he caught Esquer with double left hooks and ended the round with a solid right hook. Another left hook in round two stunned Esquer and a cracking right uppercut ended another excellent round for Melindo.

In an action-packed third round Melindo marked by some furious exchanges Esquer connected with a low blow which referee Tapdasan apparently didn’t see. Melindo was warned for a low blow in round four while Esquer kept shaking his head after getting caught by Melindo’s combinations as though to say the punches didn’t hurt. 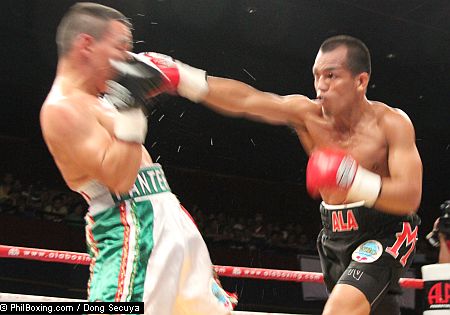 Melindo was called for another low blow in round five although referee Tapdasan didn’t deduct a point despite his previous warnings. Esquer connected with three straight jabs even as he continued to complain about imaginary low blows and went into a series of highly exaggerated acts while rolling on the canvas .

Melindo suffered a small cut on his right eyebrow following a head-butt before Melindo drove Esquer to the ropes and decided to forget the body shots which were called low and instead went to the head with vicious flurries that rocked the Mexican. 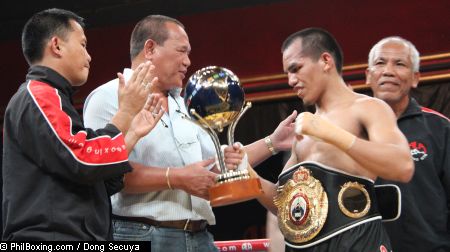 After connecting with an obvious low blow and receiving a left to the chest, Esquer claimed he was hit by a low blow prompting his corner men to step into the ring forcing referee Tapdasan to call a halt.

In fact it was Esquer who was disqualified in the 7th round for repeated low blows in his last bout against Ricardo Nunez for the Latino flyweight title. In a post fight interview with TV commentator Bill Velasco of ABS-CBN which telecast “Pinoy Pride XI” on Channel 2, said “He knew he was going to lose. His body was weak and I would knock him out.”