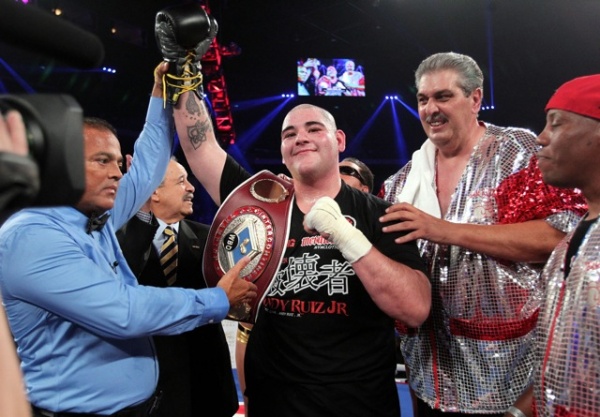 Former heavyweight champion George Foreman appeard on ATG Radio and discussed several of the up and coming American heavyweights. After going through the names, Foreman views undefeated contender Andy Ruiz (20-0, 14KOs) as the next big thing in the heavyweight division. Foreman does not have the same heavy feeling about crushing puncher Deontay Wilder (29-0, 29KOs). Foreman was more impressed with Ruiz’s recent KO win over undefeated Joe Hanks than Wilder’s brutal KO of former champion Sergei Liakhovich.

“Ruiz, I love him. The guy is a genuine puncher. He was in with an undefeated fighter who didn’t think he would get knocked out. We have a genuine contender coming on to the scene. I think in two and a half years, maybe less – he will be heavyweight champ of the world. [With Deontay Wilder] I only have hope. I hope this is the second coming of a giant that will come in the heavyweight division and clean things up and make everything exciting. Other than hope, I don’t have too much to say about him. The Ruiz guy, I see promise in his future. The other guy – I have hope….that’s all,” Foreman said.