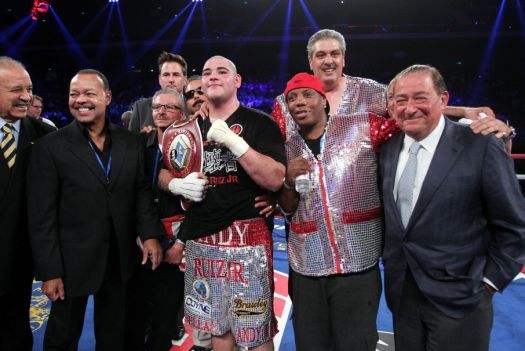 Andy Ruiz Jr may look like a run of the mill fat kid, doomed in the pro boxing world, but he can fight, and he showed off his skills, hand speed, and power today in Macao, knocking out Joe Hanks in the fourth round of a prospect vs prospect heavyweight battle.

Ruiz (20-0, 14 KO) had Hanks looking overmatched in the first two rounds, as his speed of hand was simply too much for the more lumbering Hanks (21-1, 14 KO). Hanks, though, did come back with a good third round, landing a couple of big blows, but Ruiz just went through them. Then in the fourth round, Ruiz struck suddenly with a right hand that caught Hanks totally by surprised, followed by a left that sent the big man down to the canvas, “timber!” style. The referee got to a count of “nine and three-quarters,” if you will, but that’s not 10, so he didn’t count Hanks out there. Hanks was done moments later though, as Ruiz jumped in on him and put him down again, finishing the fight at 1:41 of the fourth round.

It is expected that Ruiz will be back on the Pacquiao-Rios card in Macao on November 23.