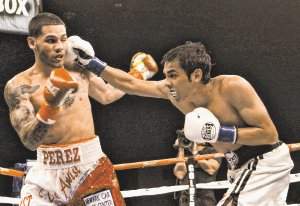 In the co-main event, Randy Caballero’s first ShoBox bout promises to be the toughest of his career as he faces Mexico’s Jose Luis “Tapitas” Araiza in defense of his WBC Youth Intercontinental title in a 10 round bout..

This ShoBox doubleheader, which is presented by Golden Boy Promotions and sponsored by Corona, DeWalt Tools and AT&T, will be televised live on ShoBox: The New Generation at 11:00 p.m. ET/PT (delayed on the West Coast) on SHOWTIME®.

When you’ve ended eight of your wins in two rounds or less, it’s clear that you have the kind of power to draw attention from boxing experts and fans alike. Yet while Omar Figueroa Jr. (14-0-1, 11 KO’s) has been on the boxing world’s radar for a couple of years, it wasn’t until January 6 that everyone got a true dose of the potential that the 22-year-old “Panterita” possesses. It was on that night earlier this year that Figueroa stopped unbeaten and highly regarded fellow prospect Michael “The Artist” Perez in six rounds in the same building in which he will fight on March 16 and the Texan expects the same result against Ramon Ayala.

A respected amateur who is now soaring towards the top of the lightweight division, Ramon “Nino De Oro” Ayala (23-2-1, 11 KO’s) has done a lot of fighting for someone just 23-years-old, but it’s that experience which he expects to lead him to victory when he battles Omar Figueroa in March. Winner of five in a row, including three by knockout, the former WBC Youth junior welterweight champion has the style, desire and skill to give anyone problems in the ring and that’s just what he’s planning on doing to Figueroa on March 16.