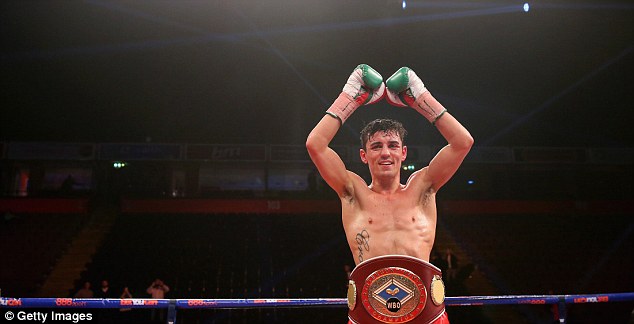 Anthony Crolla: The Ultimate Goal is a World Title Two friends punch lumps out of one another for half an hour, putting aside their friendship for local bragging rights and to take another step on the ladder to fighting for world honours. And when Anthony Crolla 28-4-1 (11 KOs) had finally halted the unrelenting and valiant challenge of John Murray 33-3 (20 KOs) after 10 rounds in front of a fervent Manchester crowd last Saturday night, the two British lightweights shook hands and continued their friendship after the dust had settled.

With Crolla in a “Zombie like state” for a few days after a lack of sleep due to aches and pains, he then received a call from the friend that gave them to him.

“It was really nice of him (Murray) to phone,” Crolla told BoxingScene.

“We said we’ll meet up in the next week or two and grab some food or something. We just talked about the fight and we had a good chat. It was really nice to go over it. We both enjoyed the night, the occasion, the build-up and everything that came with it. It was a great thing for Manchester boxing and for us both to be involved in. We were mates before it and after a great fight like that we’re still mates I have even more respect for him now.”

With his body now healed, Crolla told me he is ready to go again. After three of his last four bouts having been against top ten British lightweights, the 27-year-old is now looking for a world title shot in the coming months and hopes that a win in his next fight, at the very least, will earn him a spot to contest one.

“The domestic scene is fantastic and there’s some great fights there but I feel like I’ve paid my dues. I’ve not got a problem fighting those fighters but the ultimate goal is a world title. If it’s not my next fight then I’d like to get in a position to fight for one.

“It’s not for me to say I’m above that level but I feel as though I’ve earned my shot. I’ve earned my stripes. I’ve been in good domestic fights and not ducked anyone. Now hopefully [my promoter] Eddie [Hearn] and the team behind me are gonna do their very best to get me a world title shot at some point. I’d like some sort of meaningful fight. I’m not saying Saturday wasn’t one, I don’t mean it like that, but I want a big fight for me. I believe I’ve earned my shot and I don’t believe anyone can say differently.”

Crolla knows that whichever world champion he could possibly face at 135lbs, it will be anything but straightforward. In Terence Crawford (WBO), Miguel Vazquez (IBF), Richar Abril (WBA) and Omar Figueroa (WBC) there are various challenges of craft, guile, awkwardness and grit. Crolla doesn’t mind who it is in the other corner.

“If any of those fights were offered I’d snap their hands off and take it,” he said.

“You can’t look at those world champions and say ‘That route’s better, that route’s easier’. I honestly believe it’s one of the toughest divisions. I know it is domestically but on the world stage when you look those fighters, if you asked the opinion of boxing people who the best lightweight is they’d be split. I honestly couldn’t say which one was harder or easier. It’d be a pleasure to share a ring with any of them.”

And what about Ricky Burns? The Scot who was comfortably out-pointed when losing his WBO belt to Crawford last month had been consistently linked with Crolla during his reign as a world champion. I asked the Mancunian if the fight still interests him.

“I’ve got great respect for Ricky. We’ve been due to fight a few times and it’s not happened. Ricky’s a great fighter and I want to test myself against the best and I see a fight with Ricky as that being what I would be doing. If the fight happens, it happens. If not, so be it. I don’t want to be chasing that fight and be the way Junior Witter was to Ricky Hatton. It’d be a pleasure to fight him. Ricky’s going his route and I’m going my route and if our paths cross, and there’s a good chance they will then the fight will happen. At the minute it won’t be happening.”

There were doubts about Crolla when he moved up to 135lbs from 130lbs a few years ago. Would he be strong enough? Is he not just a Super featherweight? Will he have the power? With wins over former world champion, Gavin Rees and former world title challenger, John Murray, those questions have been comprehensively answered. His confidence is growing. His performances are improving and credit is down to him and his trainer Joe Gallagher. So why does Gallagher come in for so much flak these days, especially on social networks?

“There’s some brilliant boxing fans out there, 99% of them are but you get the small minority. Whatever they want to say about Joe is their opinion and they’re entitled to it but what you can’t deny is that he’s doing brilliant things in a big way.

“I think if you get a parody account made about you then you’re doing something right (laughs). Those people that have done that have done Joe a favour. It’s given him more and more publicity. It does make me laugh. I’ve saw people on social networks say: ‘I’ve got nowt against Crolla but I want him to get knocked out because I can’t stand Gallagher’. We’re a team, what do you want me to say?: ‘Yeah, great don’t worry about it. You want me to get knocked out?’ If you’re wishing Joe’s fighters to get knocked out to get at Joe then you’re wishing it to us personally as well.”

Like the rest of the close-knit Gallagher’s gym, Crolla shrugs off the stick that his trainer gets. He knows he has the right man in his corner and is continually seeing improvements in all aspects of his boxing with much more to come.

“I believe I’m improving all the time. I’ve got a lot more improving to do which is a good thing. I’ve grown as a fighter and the last few performances have been getting better. And with each fight I want to raise my performance which is something that I believe that I’m more than capable of doing.”