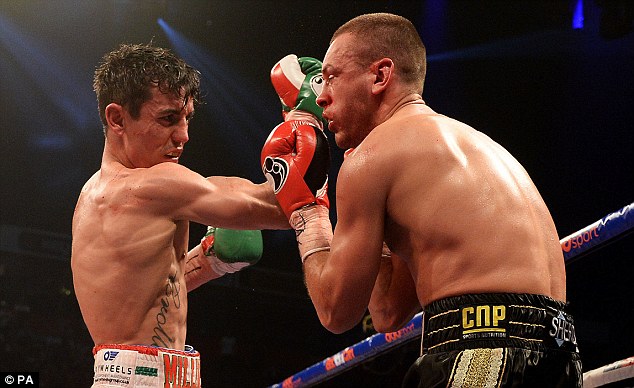 Tough: Anthony Crolla stopped good friend John Murray in the 10th round of the battle of Manchester

Anthony Crolla won the battle of Manchester by sensationally stopping John Murray in the 10th round.

The 27-year-old successfully defended his WBO inter-continental title in the process, a result that propels his world title hopes.

In a contest to be fought at lightning speed, Crolla just managed to come out on top against his good friend and former gym-mate. Worry: Murray put ‘the fear of God’ into Crolla, according to the eventual winner in a gruelling battle Murray started very quickly and had Crolla on the ropes in the third round, but the favourite grew into it – coming well out on top from the eighth onwards.

‘It was even tougher than I expected,’ Crolla told Sky Sports. ‘No matter how tough that looked, me and John were the luckiest men in this arena.

‘I prepared for this fight like no other, John put the fear of god into me. I remember how tough those sparring sessions were and I knew I had to keep a cool head in a hot kitchen.’

Murray did concede that Crolla had the better of it.

‘I gave it my all, I was the best I’ve been in training and he’s beaten me at my best,’ he said. ‘I want to take my hat off to Anthony because he was bang on.

‘I don’t want to make any excuses, as the rounds went on maybe I began to feel the inactivity but full respect to Anthony, I had a full camp and felt great.’ Could’ve been different: Murray started at lightning speed and landed a number of punches on his opponent Big win: Crolla’s world title hopes have been propelled as he beat his former gym-mate at the Phones 4u arena
http://www.dailymail.co.uk/sport/boxing/article-2608786/Anthony-Crolla-stops-John-Murray-10th-round-battle-Manchester-defend-WBO-inter-continental-title.html
|Anthony Crolla|John Murray|WBO Inter-Continental