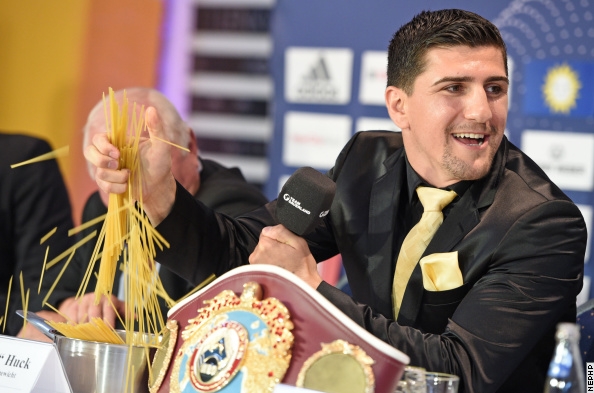 Huck: “I will make spaghetti out of Larghetti” This Saturday night at the Gerry Stadium in Halle/Westphalia, Germany, Huck will attempt to defend his title for the 13th time when he faces undefeated Italian challenger Mirko Larghetti.

A victory by Huck will equal the number of defenses set by Johnny Nelson.

The bout was originally scheduled forlast March until Huck (37-2-1, 26 KOs), broke his thumb in training.

“I was ready back then and I’m even more ready now,” said the unheralded challenger in July when the new date was announced.

The bigger question is whether Larghetti is aware of what lies ahead.

Huck, 29, who was born in Serbia,but lives in Germany, captured the cruiserweight crown in 2009. He was last seen in the ring last January,dispatching tough Firat Arslan in six brutal rounds.

The victory was one of the most impressive of Huck’s career—since Arslan gave him all he could handle the year before.

Arslan entered the rematch extremely confident, until Huck flattened him with a combination.

Huck hasn’t lost a fight since being edged by then-WBA heavyweight champion Alexander Povetkin in 2012.

Larghetti, 31, will be fighting for the first time outside of his home country of Italy. His resume is spotty. A few months ago he knocked out one Attila Palko in two rounds.

Palko entered the bout with a record of 17 wins and 12 losses. Larghetti won the European Union cruiserweight belt in 2013 with a decision over Vincenzo Rossitto.

Despite his inferior competition, Larghetti’s trainer, Salvatore Cherchi, thinks his man can pull off the upset victory on Saturday.

“Every reign has to come to an end,” Cherchi said during a recent news conference.

“Marco Huck has had a lot of success in the past, but come Saturday, a new era is about to start, and that will be Mirko Larghetti’s.”

“I am not too tired to repeat myself,” said Huck. “I will make spaghetti out of Larghetti. Listen good to me, Salvatore, I will break your fighter to pieces.”

The fact that Larghetti is something of an unknown quantity could help the challenger in the early rounds. Huck could be a little over-confident and thinking about his next fight.

Though farfetched, anything is possible.

Huck has struggled with what many perceived as inferior competition in the past. He has a tendency to let some former combatants take the lead in fights, forcing him to rally.

Larghetti is an aggressive fighter with pretty good power. His punches can be wide, which could leave him open to counters from the defending champion.

Huck won’t shy away from standing in the pocket and rumbling. He’s strong, determined, and extremely durable. He can move when needed, has a sound defense, and packs a powerful right hand.

Larghetti will need to prove he can handle the aggression of Huck.

He’ll try, but eventually the more skilled Huck will break him down and win the fight by stoppage before round 10.