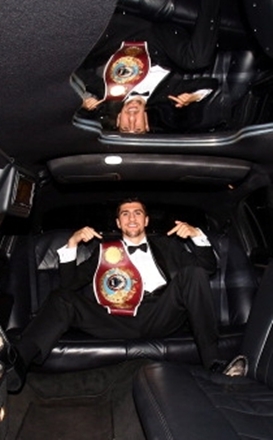 Huck vs. Arslan Rematch is Finalized For September 14th Team Sauerland can finally confirm that the hotly anticipated rematch between Marco Huck (36-2-1, 25 KO´s) and Firat Arslan (33-6-2, 21 K.o.´s) is official. The WBO Cruiserweight Champion takes on his mandatory challenger at the Hanns-Martin-Schleyer-Halle in Stuttgart, Germany. The pair will once again trade blows on September 14 in a fight that promises to be a real cracker.

Last time round, the two Germans met on November 3. Back then Huck won by a disputable unanimous decision (115-113, 115-113 and 117-111) at the Gerry Weber Stadion in Halle/Westphalia, Germany. Right after their thrilling encounter Arslan demanded a rematch.

“I still believe that I won our first fight. I should be the world champion”, said the former WBA Titlist who lives close to the city of Stuttgart. The 42-year-old cruiserweight recently defeated Varol Vekiloglu and therefore made the WBO mandatory status his own. “I won’t let my second chance to capture the crown just slip away. This is a fight right on my own home turf.”

For Huck, the second outing against Arslan is a question of honor. “I understand that Firat is disappointed. I was in the same position after I fought Alexander Povetkin. I saw myself as the winner in that match-up but the judges didn’t. That is exactly why I always said that I would give Firat a rematch even if he wasn’t my mandatory challenger.”

Frederick Ness, managing director of Team Sauerland, is also excited about the constellation of the championship bout. “This is one of the fights that was right at the top of every boxing fans wish list. Their first bout was full of drama and excitement. That is why I cannot wait for September 14.”

Tickets for the big fight night at the Hanns-Martin-Schleyer-Halle in Stuttgart, Germany will be available from this coming weekend onwards at www.eventim.de, www.easyticket.de and www.boxen.com.