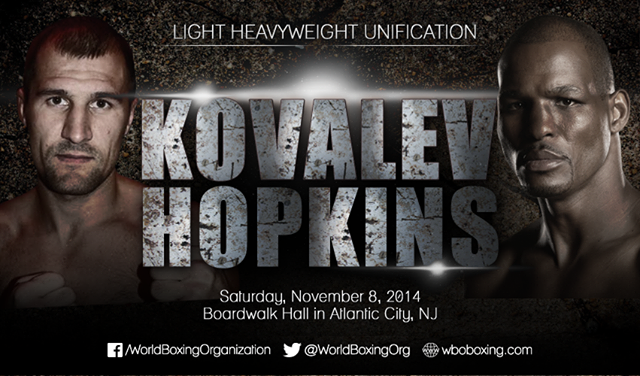 World Boxing Organization (WBO), by president Francisco “Paco” Valcarcel, announced today the officials who will work this Saturday, November 8, in the fourth title defense of the light heavyweight champion Sergey Kovalev, from Russia, against Bernard Hopkins, from United States, to be held at the Boardwalk Hall in Atlantic City, New Jersey, United States, in a Main Events presentation.

Meanwhile, the judges for the Kovalev-Hopkins will be Carlos Ortiz Jr., from New York, Clark Sammartino, from Rhode Island, and Lawrence Layton, from New Jersey.

The WBO supervisor for this fight will be the President Paco Valcarcel.

Kovalev, selected the WBO Boxing of the Year, won his title on August 17, 2013, with a fourth round TKO win over Nathan Cleverly, and got victories over Ismayl Sillah (KO2), Cedric Agnew (KO7) and Blake Caparello (TKO2) on his tree defenses.