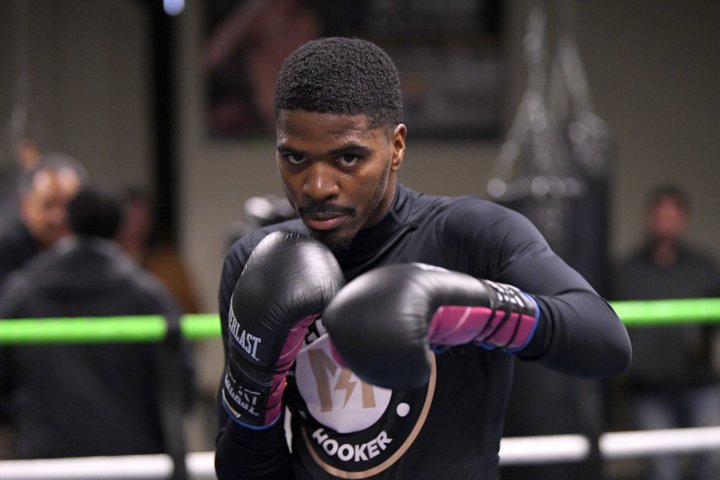 Hooker Warns: I Can Do Some Real Damage To Saucedo’s Career!

In 2018, Maurice Hooker won his first world title, and he will defend that title for the first time against fellow unbeaten Alex Saucedo this Friday night. But his toughest battle may be in December, when he has to get Christmas gifts for his eight children.

“Oh man, Christmas is tough,” he laughs. “You gotta get them what they want.”

It doesn’t even end there, as three of kids have birthdays in January, followed by one in February.

“Then I get a little break,” Hooker chuckles. But that’s just from birthday parties and gift buying. As far as his day job is concerned, the only thought is of keeping busy and chasing his peers at the top of the junior welterweight division. It’s the same philosophy he had after he came home from Manchester, England in June with the WBO title after beating Terry Flanagan.

“Let’s get back to work,” he said. “It don’t stop after I win the title. It’s a new story and I’m starting a new career. Now I’m 0-0 and Alex Saucedo is my first defense. We start over now.”

The new chapter may just be beginning, but the last one bears looking at, as Hooker could have been a statistic growing up in the Oak Cliff neighborhood of Dallas, but through boxing, he found his path, and when he beat Flanagan, he fulfilled his promise and became an example for those coming up the way he did.

If there’s one thing notable about Hooker’s personality, it’s that he isn’t fond of sitting back and smelling the roses, but even he had to smile when he found out that artist Jules Muck, aka MuckRock, had painted a mural of him in his hometown. Hooker has just seen photos of the mural thus far since he’s been away at training camp, but soon he will see it up close for himself.

“I can’t wait to see it,” he said. “It means everything and it’s more motivation to me.”

A mural that takes up the side of a building, a championship belt, the respect of his hometown. It’s all heady stuff, but waiting for Hooker in Oklahoma City this Friday is a hometown hero in his own right in the unbeaten Saucedo, a fighter hoping to become only the second fighter from OKC to win a world boxing title. So if Hooker was hoping for a warm welcome in his first fight as champion, that’s not likely to be the case. But that’s okay, because fighting and beating Flanagan in Manchester was a good test when it comes to winning the big one on the road.

And though he’s taking Saucedo as seriously as he can, he also watched the challenger’s recent tougher than expected win over Lenny Zappavigna and believes it spoke volumes about the local hero’s chances of pulling off the win.

“I thought he (Saucedo) was gonna win and beat that guy with ease,” said Hooker. “But he had trouble. I think the ref should have stopped it, but being that he was fighting at home, they didn’t. He sat on the ropes and didn’t really swing. He sat there for a minute, and aw man, he just took a beating in that fight. I know in his mind he had to have thoughts like, ‘Is boxing for me?’ Every fight he has, he gets cut or he goes to war and that’s got to take a toll on your body fight after fight. It’s gotta catch up to him.”

Hooker plans on making it catch up to Saucedo in two days.

“My style and the way I fight, I can do some real damage to his career, and not just the fight,” he said. “The dude gets hit a lot. No defense at all. We’ll see Friday.”

If Hooker successfully defends his crown, his place in the one of the sport’s most exciting divisions gets even stronger, and while several of the top guns at 140 battle it out in the World Boxing Super Series, he does have WBC champ Jose Ramirez in his lane and then the WBSS winner. It’s a great place to be in, and he’s loving it.

“That’s very exciting,” he said. “That’s more motivation and I’m ready for them – for Alex Saucedo and everybody else.”

That’s the talk of a champion, one who knows that while thinking about the future is nice, nothing happens without a win on Friday. And with that night all to himself, the 29-year-old is in a statement-making mood.

“People are going to see good boxing, old school like Muhammad Ali,” Hooker said. “Use the jab, move around the ring, but keep your eyes up because it might end in a hurry. I’m an exciting fighter and I’ve got power in both hands. Alex Saucedo is young and he’s hungry and he’s coming. And I’m prepared for everything he brings.”

But is he prepared for Black Friday shopping?

“It’s gonna be a good Christmas,” he laughs.