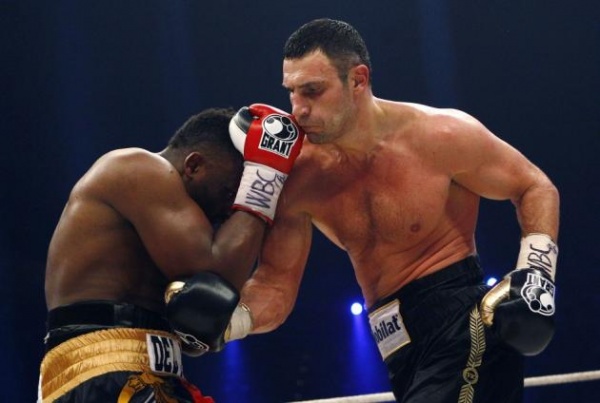 In the bare-knuckle arena of Ukrainian politics, the emergence of a world-famous boxer would seem a match made in heaven.

Vitali Klitschko, one of the most famous athletes in the world and heavyweight boxing champion, is also the leader of the Ukrainian Democratic Alliance for Reform party and a member of the Kiev parliament. “Dr. Ironfist,” as he is known to aficionados of pugilism, may also become a serious contender for the next presidential election scheduled for 2015.

Perhaps following in the footsteps of athletes in the West who ventured successfully into politics – including bodybuilder/action film hero Arnold Schwarzenegger, who became governor of California, and wrestler Jesse “The Body” Ventura, who was elected governor of Minnesota – Klitschko’s trajectory into politics would hardly be unprecedented.

But Kitschko is a far more accomplished athlete than the aforementioned gentlemen. Only 13 when he discovered boxing, he first won six World Championship titles in kickboxing, then turned to “traditional” boxing. As an amateur, he was thrice crowned Ukrainian Heavyweight Champion. After turning pro in 1996, when he was 25, Klitschko won 45 fights and lost only two – giving him the second-highest rate of victory in boxing history, behind only the legendary American heavyweight, Rocky Marciano.

Klitschko is, in fact, the ninth longest-reigning world heavyweight champion in history.

Given Klitschko’s stupendous success as a boxer (he also holds a Ph.D.), he would appear well suited to enter the bruising ring of politics. (Debates in the Ukraine parliament sometimes degenerate into actual physical brawls – for example, this past March, lawmakers landed haymakers at each other when one MP started speaking in Russian).

“Ukrainian politics is really a fight, because every day you meet with people that you have to convince, that do not want to listen to you, who conduct different schemes to deceive,” Klitschko told Radio Free Europe/Radio Liberty.

“And Ukrainian politics, unfortunately, resembles not a sport, which operates with rules, but a ‘no-rules fight.’ It is hard, but we all want to have not only politics, but life, with rules.”

Klitschko has already lost two elections for the mayoralty of Kiev under the “Vitali Klitschko Bloc” party, but these disappointments hardly knocked him out of the ring.

In 2011, the Vitali Klitschko Bloc renamed itself as the Ukrainian Democratic Alliance for Reform (the acronym of which, UDAR, not surprisingly means “strike” or punch”). UDAR essentially espouses two platforms: anti-corruption and pro-European. Last year, the party won 14 percent of the seats in parliament (40 seats), making Klitschko an MP.

Yet, Dr. Ironfist has not retired from the boxing ring – in fact, he fought just last September against Manuel Charr of Germany to defend his WBC title (Klitschko won on a technical knockout).

Given his new focus on politics, it is unclear when he will formally retire from prizefighting.

“I cannot say definitely that Vitali will return to the ring, or when,” said Fritz Zdunek, Klitschko’s coach, according to the Boxing Observer.

“Everything will depend on his political activities. Last week, I spoke to him on the phone and he told me ‘do not worry; I am already exercising 90 minutes a day.’ I don’t think that we’ve heard the last word from Vitali when it comes to boxing.”

Klitschko may be compelled to hang up his gloves after a poll in March suggested he could finally be elected mayor of Kiev.

However, the Kiev mayoral election is scheduled for 2015, around the same time as the presidential election. According to political analyst Serhiy Slobodchuk of the Expert Ukraine magazine, Klitschko’s friends and fellow party members are reluctant to have him run for mayor because another loss in that election would kill any chances for him to run for president.

In a poll conducted in May by the Kiev International Institute of Sociology, 16 percent of the voters said they would support Klitschko for the country’s highest office (up from 9 percent last year), while only 14 percent of the voters would vote for incumbent President Viktor Yanukovych (down from 17 percent).

Klitschko is hoping that the opposition will agree to unite in order to nominate only one candidate, thereby increasing the chances to defeat Yanukovych.

With such momentum – and given the fact that former Prime Minister Yulia Tymoshenko, a major and still popular figure of the opposition, languishes in prison – these circumstances may provide a unique opportunity for Klitschko to one day become the president of his country.

He has yet to formally declare his candidacy. Still, he certainly sounded like a possible future candidate when he spelled out to RFE/RL what he thought were Ukraine’s biggest problems.

“Ukrainians rank no. 1 in Europe among people who would like to leave their country,” he declared. “Ukraine ranks second in the world in per capita mortality rate. And we are in third place as vodka consumers. This data is not very good. We want to live in a normal country. We want to look forward to the future. We want to live in a European country by European rules and standards.”