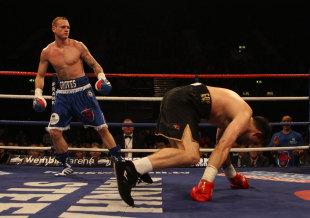 Super middleweight George Groves (14-0, 11KOs) has announced that he suffered an injury in training, which didn’t heal in time, and he’s been forced to withdraw from his upcoming fight with WBO super middleweight champion Robert Stieglitz (41-2, 23KOs), scheduled to take place on Sauerland Event’s big show on May 5th in Germany. Groves previously suffered an injury which forced him to withdraw from a rematch with Kenny Anderson a few weeks ago. The Anderson rematch is still on the ledger for June 30th.

“I am sorry to have to announce that I won’t be boxing on May 5th. I have picked up an injury in the build up to this fight. We tried to work through it but soon realized I wouldn’t be able to perform the training needed to prepare for this fight. After coming back to London immediately and seeking medical advice, I hope that this problem will be sorted soon and will only be a short delay,” Groves wrote.

“I am truly sorry to everyone involved who will be affected by this. This is without a doubt the toughest decision I have ever had to make, I am gutted but nothing worth having is given away. It has only made me more determined to achieve my goal of becoming world champion. Thanks to everyone again for their continued support in my journey.”