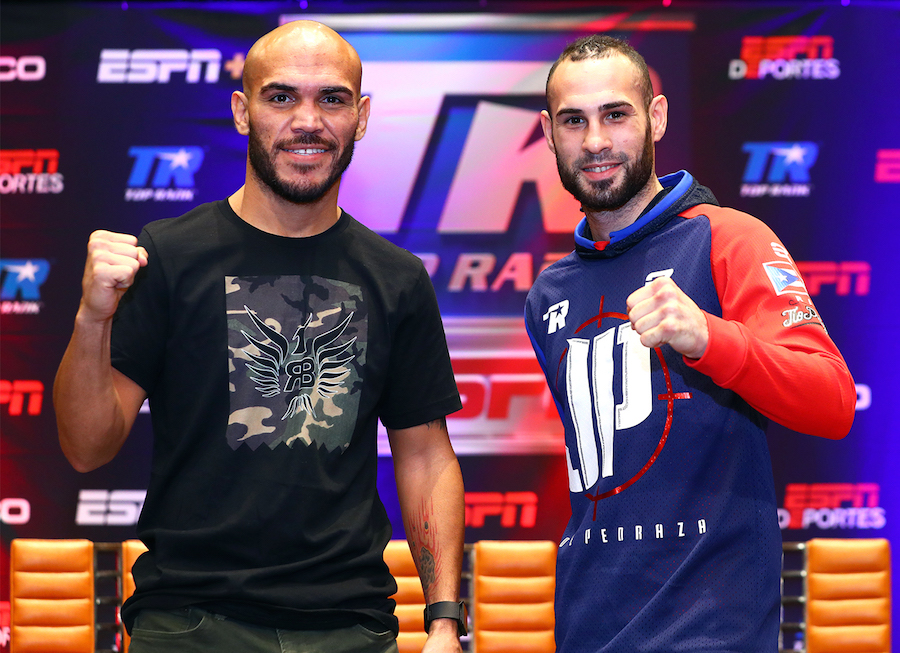 GLENDALE, Ariz. (Aug. 23, 2018) – The stakes are high for WBO lightweight world champion Ray Beltran and challenger José “Sniper” Pedraza, with the winner expected to fight WBA lightweight champion Vasiliy Lomachenko later this year. Beltran and Pedraza met at the final press conference for the next edition of “Top Rank on ESPN”, which will take place Saturday evening at the Gila River Arena in Glendale, Arizona (10:30 ET/7:30 PST).

Here is what they had to say.

“Now I have the belt and people see me as a champion. But before that, I already felt like a champion. It’s good to get recognition from the boxing world, but like I said before, I don’t feel different. Things have changed around me, but I’m still the same guy. I’m a contender. I’m the underdog. Once you get the world title, there are new challenges. You’re always looking for the best challenges out there, and now I have a very important fight against a very difficult and tough opponent. In my mind, I don’t get overconfident. I get confident, but not overconfident.”

“In 1996, I came to the United States illegally. I did it, not because I wanted to, but because I had to. Thanks to that, I’m making my dream come true. I want to dedicate this fight to all of the immigrants all over the world, especially to my Mexican people. I represent them with so much pride. Just to show the world that we don’t come to commit no crime. We come here to get a better future for our family. I represent that. I represent the truth.”

“It means a lot to me. This is the second opportunity I’m getting for a world title. I really want to win this world title because I want to bring happiness to Puerto Rico after what happened with Hurricane Maria.”

“It will be a lot of emotion and happiness for me when they say, ‘and the new champion’. but I don’t like to get ahead of myself. One step at a time, but if I win the title, it’s going to mean a lot to Puerto Rico. It’s going to bring happiness to my people.” “First and foremost, I give all the glory to the almighty God for bringing me here safely and making me who I am today. Otake is a great guy, and I can’t wait to get back on ESPN. It’s a big platform for myself and also a great platform to showcase my talent once again. I want to say thank you to Bob Arum and Top Rank promotions and all the staff for putting this show together. It’s great. It is always a huge platform. Like I said, Otake is a great guy. Physically, he’s strong. This is his second world title challenge, his second opportunity, and we know he’s going to come out fighting. He’s going to come out guns blazing. But, you know, like we always say, we don’t have to get ready, we’re always prepared. Everything he brings to the table, we have an answer for it. Come Saturday night, you don’t have to stay at home. Everyone has to come down to the Gila River Arena. It’s going to be fireworks because there’s no way that something we worked so hard for is going to slip through our hands. He says he’s going to be fighting for his soul. I have no need for his soul because I did not create him. I just want to knock him out on Saturday night and retain my title.”

“Hidenori is very tough, and he’s a credit to Japan. He’s one of the guys who’s making Japan boxing rise. At this moment, he’s a stumbling block that’s in my way to get to a unification fight. We are looking to go out there Saturday night and put on a masterclass performance and look forward to unify the division, God willing. With Top Rank and Bob Arum, we can hopefully fight at the end of the year or early next year in a unification fight. Hard work never stops. Right now, our main target is to take care of Hidenori Otake.”

“First of all, I am so very happy to be here. I want to thank Bob Arum and everyone at Top Rank for giving me this amazing opportunity. As you may know, in my first world title match in England {against Scott Quigg}, I lost. As happy as I am, taking that into consideration, I have trained very hard to make the most of this opportunity.”