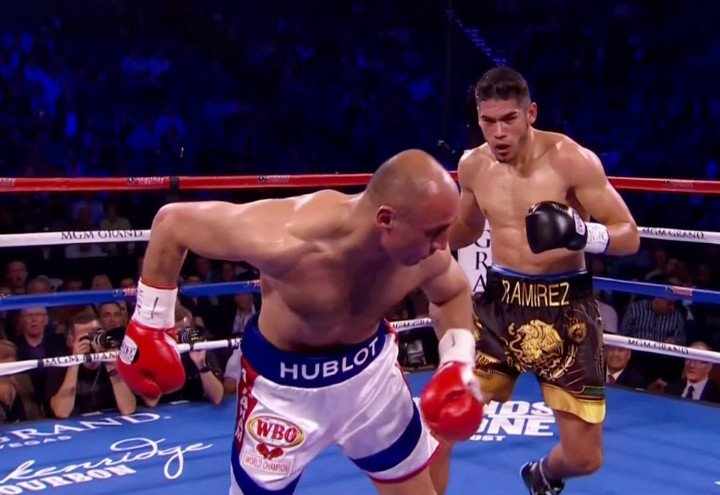 By Dan Ambrose: Undefeated #1 WBO Gilberto “Zurdo’ Ramirez (34-0, 24 KOs) won a surprisingly easy 12 round unanimous decision victory over WBO super middleweight champion Arthur Abraham (44-5, 29 KOs) to become the first Mexican to win the 168lb world title in their fight on HBO Boxing PPV from the MGM Grand in Las Vegas, Nevada. The final judges’ scores were an identical 120-108, 120-108 and 120-108.

I didn’t agree with those scores. I had Abraham winning three rounds in the fight. The judges didn’t give Abraham much credit. However, it was a very one-sided fight though, as the 6’2 ½” Ramirez was simply too tall for the shorter, older 5’9” Abraham.

Ramirez was constantly moving around the ring, peppering Abraham with jabs and hooks the entire three minutes of every round. When Abraham did land some solid shots, Ramirez was sure to fire back with counter shots.

In the 2nd round, Ramirez hurt Abraham with a left to the head that had him holding on. It was a good shot from Ramirez that caught the 36-year-old Ramirez when he was coming forward trying to land one of his own shots.

Ramirez nailed Abraham with a clubbing right hand to the head in the final seconds of the 4th round, and then gave him a hard shoulder when he attempted to come forward to retaliate with a punch of his own. It was a good move by Ramirez, but clearly a dirty move on his part. The referee didn’t do anything about it other than warn Ramirez.

In the 5th round, Ramirez hit Abraham with a hard low blow while he was coming forward. The action stopped for a bit while Abraham recovered. Before the round ended, Ramirez nailed Abraham with a rabbit shot to the back of the head. Ramirez was clearly getting dirty in this round, but Abraham kept his cool and didn’t start getting dirty with his own rough stuff.

Abraham landed two solid left hands to the head of Ramirez in the 6th round that drove him to the ropes. That was arguably Abraham’s best round of the fight, even though Ramirez still landed more punches.

From the 7th round on, Ramirez began to move much more around the ring, changing directions and throwing light hooks. The constant movement and incoming punches kept Abraham from being able to set his feet to throw his own power shots.

Ramirez dominated the last four rounds of the contest with his movement and high volume shots. Abraham looked defeated by that point in the fight, and he wasn’t trying hard to land anything the way he needed to.

Overall, it was a good effort from Ramirez. He boxed well, and kept out of the way of Abraham. It was kind of boring to watch, however. Compared to some of the more entertaining super middleweights in the division, Ramirez is decidedly boring due to all the movement that he uses. If his promoter Bob Arum wants to turn him into a star, he’s going to need to keep him a little more stationary because the constant movement is not interesting to watch. When you compare Ramirez’s performance to the other fighters on the card like Oscar Valdez and Jose Ramirez, he was very dull to watch.

Arum wants to lure IBF/IBO/WBA middleweight champion Gennady “GGG” Golovkin up to super middleweight so that he can fight Gilberto Ramirez. I don’t see that happening ever. Ramirez is a very, very big super middleweight who could clearly fight in the light heavyweight division if he wanted to.