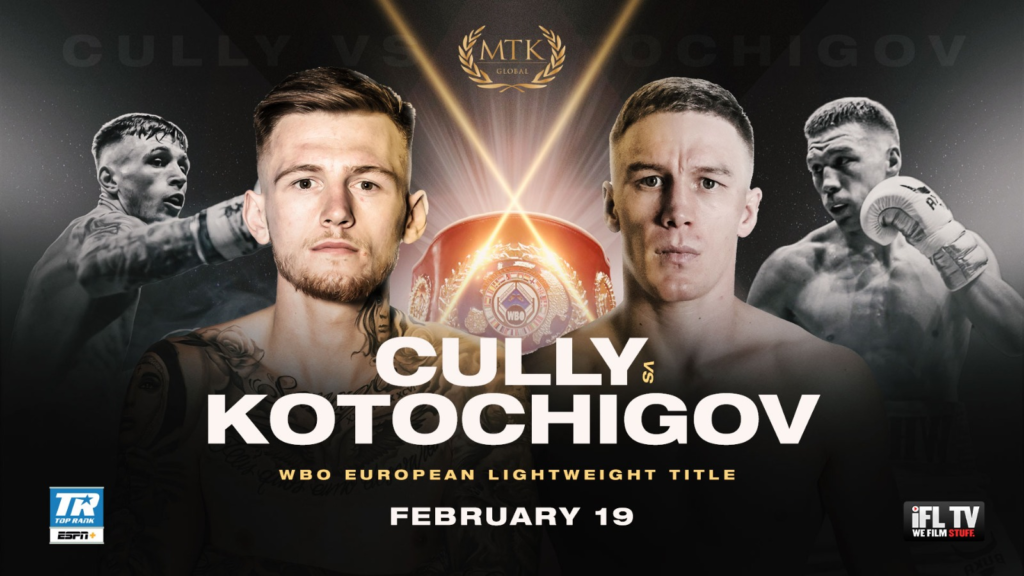 Gary Cully will go up against Viktor Kotochigov for the vacant WBO European lightweight title as part of the huge #MTKFightNight event taking place on Friday 19 February.

Cully (11-0, 5 KOs) and Kotochigov (12-1, 5 KOs) will meet on the undercard of the British lightweight title fight between Liam Walsh and Paul Hyland Jnr, which will be broadcast in the US on ESPN+ in association with Top Rank, and worldwide on IFL TV.

Irish star Cully was last in action in August, when he defeated Craig Woodruff, while former WBC International champion Kotochigov will be looking to bounce back following his battle with Maxi Hughes in October.

Cully said: “I’m really excited to be kicking off 2021 with my biggest fight yet. At the start of 2020 I had my first title now, and now at the start of 2021 I’ll be fighting for my second title, so thanks to MTK Global for getting it done.

“I watched Kotochigov against Maxi Hughes and he’s technically very good. He’s more experienced than me, and he’s coming off a loss so he will be looking to redeem himself. It’s a dangerous opponent that is coming to win and I’ll have to be on the top of my game to beat him.”

Promoter Lee Eaton added: “We’re thrilled to add this fantastic fight between Gary Cully and Viktor Kotochigov for the vacant WBO European lightweight title. Both men are determined to win and it’s an extremely interesting contest.

“It’s the latest big fight to be added to the bill following the British lightweight title showdown between Liam Walsh and Paul Hyland Jnr, so it looks set to be yet another must-see event.”

More news on exciting additions to future #MTKFightNight events will be announced over the coming weeks.