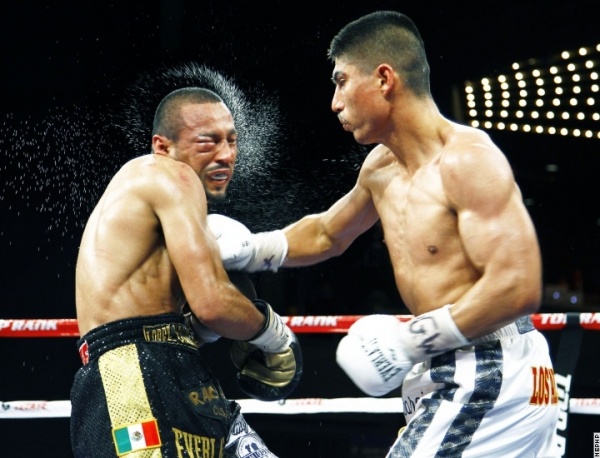 It was going to take a special performance for any of the fighters to separate themselves from the rest of the pack on HBO’s live tripleheader.

Mikey Garcia was well on his way to delivering in spades, before a headbutt left him with a broken nose and forced to accept a technical decision win over Orlando Salido.

The win earned the unbeaten Californian a featherweight belt Saturday evening at Madison Square Garden’s The Theatre in New York City. Scores were 79-70 and 79-69 (twice) in the contest, which was stopped just prior to the start of the ninth round.

A notorious slow starter who normally breaks down his opponents as the fight wears on, Garcia deviated from form as he struck early and often. Salido literally didn’t know what hit him, suffering two knockdowns in the opening round. Both knockdowns were produced by Garcia left hooks, though Salido never seemed badly hurt on either occasion.

The early deficit would only get worse for Salido, who fell behind by an insurmountable eight points through four rounds after suffering knockdowns in rounds three and four. A right uppercut produced the third round knockdown, again not very devastating but terribly effective as Garcia never came unnerved.

Salido’s best moments of the fight through four rounds actually came just after the fourth knockdown of the fight. The defending featherweight titlist fought back well enough to arguably bring the round from 10-8 to 10-9, though scorecards figured to not at all play a factor by the end of the fight.

The 32-year old veteran never stopped trying, at times coming forward and attempting to force the action. However, little of it proved effective. Garcia remained in control nearly every step of the way, never falling in love with his power and always placing his punches well enough to inflict sustained damage.

Ever the warrior, Salido refused to roll over and play dead. The proud Mexican came out swinging for the fences in round seven, a rare frame where Garcia opted against taking the lead as he spent most of the round in reverse and in counterpuncher mode.

Garcia regained control in the eighth, but ran into medical concerns when a Salido headbutt – ruled accidental though replays suggesting the possibility of ill will in place – landed flush on the challenger’s nose. The issue was addressed in between rounds, when it was discovered that Garcia couldn’t properly breathe.

Time was called to allow for the ringside physician to examine the injury, at which point the fight was stopped and went to the scorecards.

Garcia picks up by far the biggest win of his still young career, even if in anti-climactic fashion.

This fight was first scheduled to take place last November. Those plans were pushed back after Salido suffered an injury during training camp. Garcia went on to stop late replacement Jonathan Barros in eight rounds during their HBO-televised featherweight bout.

The two-month delay didn’t at all bother Garcia, who looked as sharp as ever before. Still, a rematch is offered by Garcia, if only out of respect for the fallen yet classy champion.

How soon Salido will have to wait depends on when his opponent’s wounds heal.

“This was my first time breaking my nose. It was hard for me to breathe, which the doctors looked at. I should have (fought through it),” Garcia admits. “I was in control the whole fight. That’s how I intended and that’s how I fought.”

Salido snaps a five fight win streak as he falls to 39-12-2 (27KO). A ring veteran of 17 years, Salido sees a featherweight reign come to an end nearly two years after winning the belt in dramatic fashion on the road in Puerto Rico. Salido’s pair of knockout wins over Juan Manuel Lopez continue to serve in the standout moment of his career.

Meanwhile, Garcia’s career is just getting started, and he wastes no time in setting his sights on the biggest fighters in and around the division.

“I want to extend an invitation to Yuriorkis Gamboa, whatever weight he wants to fight at,” insists Garcia. “He can come down from 130 lb, we can move up from 126. I want that fight.”

In the meantime, plenty of challenges should be rolling in now that Garcia has been crowned a major titlist, more than a decade since his brother – and now head trainer – Robert Garcia won his first major title as a pro.