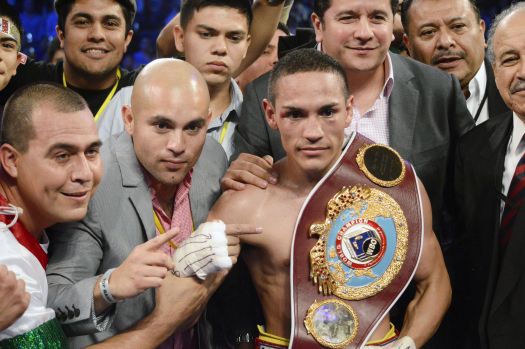 2012 “Trainer of the Year” Robert Garcia has sounded a note of caution for mandatory flyweight challenger Milan Melindo who battles WBO/WBA champion Juan Francisco Estrada of Mexico at the Cotai Arena of the Venetian Resort Hotel and Casino on Saturday.

Garcia noted in a wide-ranging conversation with the Manila Standard that Estrada “comes on strong in the later rounds.”

Garcia who will be in Macau along with Brandon “Bam Bam” Rios and will watch the Top Rank fights along with eight division world champion Manny Pacquiao whom Rios will face on November 24 in the same venue, noted that when Estrada beat Brian Viloria to win the title last April 6 “he played it smart in the later rounds and pulled it off.”

Garcia believes the Viloria fight was “very close and Estrada showed tremendous heart” but that he feels Viloria who is “very skillful maybe fought the wrong fight” which was the consensus of many at ringside who had Viloria out-boxing the Mexican in the first half of the fight but making the mistake of trying to slug it out and faded in the championship rounds just like he did when he lost the IBF light flyweight title to Carlos Tamara.

Garcia said Viloria had trouble when he faded in the Tamara fight but “looked sensational when he knocked out Ulises “Archie” Solis in the 11th round to win the IBF flyweight title on April 19, 2009 at the Araneta Coliseum.

The respected trainer who handles his younger brother and WBO world featherweight champion Mikey Garcia and former WBO, Ring Magazine super bantamweight champion Nonito “The Filipino Flash” Donaire, told the Standard that “if there is a rematch Viloria will beat Estrada. I really like Brian and he should be back on top of the world.”

Garcia said Viloria’s loss to Estrada was “something that happens. It’s happened to many fighters.”

Both Melindo and Estrada are in Macau with the undefeated Filipino tapering down while Estrada, according to boxing writer Carlos Costa of Panama, reportedly looked sharp and focused during a training session with head trainer Alfredo Caballero, shadow boxing, working on the punch-mitts and hitting the speed ball and the heavy bag.