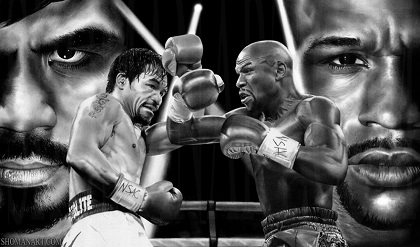 FLOYD MAYWEATHER VS. MANNY PACQUIAO: HOW ALL ROADS LEAD TO THE TWO FIGHTERS FACING EACH OTHER AT THE PERFECT TIME The countdown has begun, Mayweather vs. Pacquiao is now set for May 2nd and the two fighters will meet in the ring at the MGM Grand in Las Vegas, Nevada. Even though it took over five years to come together, boxing fans are still looking forward to what will be the biggest fight in boxing history. Besides the fans and media, sports books have also been eagerly awaiting this bout as it’s sure to bring a new wave of bettors looking to make some money placing a bet on their favorite boxer. For those who can’t make it out of Vegas to lay their bets, here is a guide showing how easy online betting can be http://www.gamblingsites.com/sports-betting/online/.

Floyd Mayweather (47-0, 26 KOs) opened as a -240 betting favorite, while Manny Pacquiao is currently listed at +200 underdog. Regardless of the betting line, most fans are split down the middle on who they believe will win this fight, as Mayweather has shown some signs decline in recent years, while Pacquiao has looked as dominant as ever in his last few bouts. Mayweather, who turns 38 tomorrow, has been hit more in his last two bouts than people are used to seeing and his footwork has appeared to slow down. Pacquiao, who is now 36, still looks to have the same speed and athleticism that made him an eight division world champion.

While the years have brought the two fighters closer in terms of ability in the ring, Floyd Mayweather will still carry in a tactical advantage as he is one of the best defensive fighters in the sport and certainly one of the best counter punchers — something that has caused issues for Pacquiao in the past in his four bouts with Juan Manuel Marquez. Pacquiao on the other hand is one of the fastest, most athletic fighters Floyd has faced, and also brings a southpaw style that has shown to give Mayweather some issues, as was evident early in his fight with Zab Judah.

Beyond the strengths of both fighters, this bout stands to break the box office records, as currently the PPV record holder is Mayweather-De La Hoya at 2.4 million, and the upcoming Mayweather-Pacquiao bout is expect to shatter that with over 3 million PPV buys. The event truly will be the Super Bowl of boxing, and rewards for each fighter go beyond the belts that they will win in the fight. Mayweather currently holds the WBC/WBA welterweight belts and Pacquiao has the WBO welterweight strap, three of the four belts will be unified with the winner, but the real reward will be the estimated $120 million and $80 million pay checks Mayweather and Pacquiao are set to make, respectively.

The fight is now less than ten weeks away, and there will be no promotional tour, and no 24/7 series to promote it. All the promotion that this fight has ever needed was the names Mayweather and Pacquiao, and now that both have signed on the dotted line, the only thing left to do is to see these two titans of this generation step in the ring and decide once and for all, who really is the best boxer in the world today.