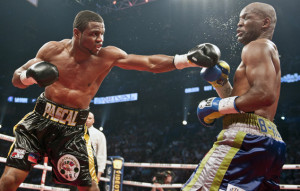 Jean Pascal (L) of Canada punches Bernard Hopkins of US during their Heavyweight championship fight for the WBC Middleweight championship, on May 21, 2011, at Bell Centre, Montreal in Quebec, Canada. Ring veteran Bernard Hopkins beat Jean Pascal by decision in a World Boxing Council light heavyweight bout to become the oldest major world champion in boxing history at 46 years old. Hopkins came on strong in the middle rounds and hung on in the 12th against the hard-hitting Canadian Pascal to get the decision in front of a crowd of 17,750 at the Bell Centre arena May 21, 2011. Hopkins won a unanimous decision against Pascal in an entertaining rematch of their December 18 draw in Quebec City, Canada. AFP PHOTO/ ROGERIO BARBOSA (Photo credit should read ROGERIO BARBOSA/AFP/Getty Images)