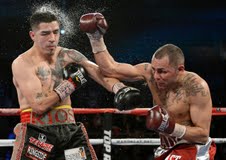 When it comes time to select the official 2013 Fight of the Year, it’s a good bet that many of the top candidates will come from the first six months. For boxing fans, January through June has been terrific.

It was a tough call to select the fight of the midyear because you really can’t go wrong with either of the top two, but in my view, the rematch between Mike Alvarado and Brandon Rios on March 30 at Mandalay Bay in Las Vegas gets the nod.

In October, they met for the first time, with Rios stopping Alvarado in the seventh round of a sensational battle that was the 2012 Fight of the Year runner-up.

When they signed for the rematch, this time for a vacant interim junior welterweight belt, expectations were sky-high for another classic. And you know what? They delivered — and then some — in yet another incredible action fight that opened the possibility of a second rematch.

This rematch was even a bit better than the first fight. It was an intense brawl with tons of clean punching, ebbs and flows. How this thing went the distance will forever remain a mystery, because the fighters were crushing each other.

In the second round, Alvarado nearly got dropped and was badly hurt by a left jab, of all things. But he rallied, and the fighters finished with a ferocious exchange that was one of the best rounds of the year. Top Rank promoter Bob Arum was so enthused that he called it the best round in a fight he had promoted since the all-time epic first round of the Marvelous Marvin Hagler-Thomas Hearns middleweight championship fight.

Alvarado-Rios II was a brutal fight. Both men were hurt, but Alvarado, who fought most of the night with a bad cut over his left eye, was able to box just enough to keep Rios off balance and eke out the close rounds to win a tight, but deserved, decision, 115-113, 115-113, 114-113.

Timothy Bradley Jr. W12 Ruslan Provodnikov (March 16 at Carson, Calif.): When Bradley, who was coming off his hugely controversial split decision win against Manny Pacquiao, was matched with Provodnikov, the boxing world yawned. Then we saw the fight. Oh. My. Goodness. The action was fierce and constant, and the drama unforgettable. Although Bradley won a unanimous decision — 115-112, 114-113, 114-113 — the fact that he made it to the final bell under the immense and nonstop pressure from Provodnikov made this a spectacle to behold. Provodnikov nearly knocked Bradley out in the first round, dropping him with a well-timed right hand, although referee Pat Russell ruled it a slip, a move that ultimately would cost Provodnikov a draw.

Provodnikov continued to hurt Bradley and had him in huge trouble. He nearly ended the fight again in the second round with another onslaught, but Bradley survived. From the third round on, Bradley was able to collect himself, get back into the fight and begin winning rounds. There was a ton of back-and-forth action, especially late in the sixth, which was absolutely sensational as they simply pounded each other. Provodnikov suffered a bad cut on his left eyelid in the ninth round, and both fighters had taken so much punishment that at various times their trainers, Freddie Roach (Provodnikov) and Joel Diaz (Bradley), threatened to stop the fight. Neither did, setting the stage for a dramatic conclusion.

With Provodnikov seemingly needing a knockout to win, he staggered Bradley with a left hand, hurt him again with a right and sent him to the canvas with a flurry of shots with 15 seconds left in the fight. A dazed Bradley beat Russell’s count, and the fight ended before another punch could be thrown.