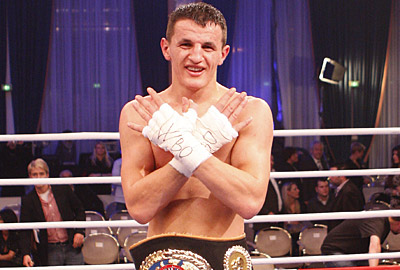 This fight was very much different than the previous encounter thanks to the will and determination of the challenger. Zoulikha, 25, and the smaller of the two, tried to find his luck on the inside. The Frenchman lacked quality punching power but was very active in winging wild hooks and swings to scare the lanky Albanian. Krasniqi, his real name being Haxhi, used some elements of rope-a-dope tactics alongside constant lateral movement and uppercuts on the inside. The first couple of rounds was rather even but in the third and in the fourth stanzas Krasniqi reached some success with his jabs and uppercuts to trouble Zoulikha a bit.

Rounds five and six turned into a crowd-pleasing war with both fighters swinging wildly in order to deliver one meaningful punch. It soon became obvious that the close quarters favored the French brawler over the German boxer, both fighters landing bombs in a sensational sixth round. Sensing the fight was going his opponent’s way, Krasniqi found something in him to turn back the tide. He increased the distance between him and Zoulikha in the second half of the fight. He was also fresher than the Frenchman and he got better and better with each fought round. As the bout progressed into the final quarter Krasniqi’s advantage became clearly visible. However, he was unable to rock durable Zulikha up until the middle of the twelfth and final stanza. It was when his combinations had finally penetrated Zoulikha’s guard and started to wobble him. After a lengthy barrage of unanswered punches referee Lahcen Oumghar of Netherlands halted the action with just five seconds remaining. Krasniqi retained his WBO European title in a surprisingly thrilling encounter.