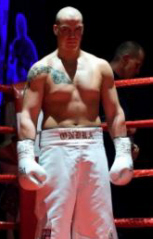 Pala and Airich ready to go WBO #6 Ondrej Pala (30-2, 21 KOs) and IBF #15 Konstantin Airich (22-5-2, 16 KOs) showed up in great shape and very self-confident at the weigh-in for their combined IBF intercontinental / WBO European championship bout tomorrow (Friday, March 9th) in Tekirdag, Turkey. The clash between the technically skilled Czech and the hard-hitting German will be broadcasted live on Eurosport (starting at 21:00h / 9pm Central European Time). It is a re-match of a 10-rounder in March 2009 which saw Pala getting away with a close Majority Decision win in Cuxhaven, Germany.

aid Pala who weighed in at 246 lbs. (111.5 kg), “I have beaten Airich before and I will beat him again. But this time it will be no hard work for the judges. I never promise to knock somebody out but I will make it very clear that I am better than him.”

Naturally Airich who weighed in at 229 lbs. (104.0 kg) has a different point of view: “I am perfectly prepared for this fight. I have been in training camp with Vitali and Wladimir Klitschko in Austria. And I know that I can and will beat Ondrej Pala. I can see in his eyes that he knows that I can beat him. He already felt my power in the first fight and he will feel it even harder this time. I will show the world why I call myself “the Sandman” – I will put Pala to sleep!”

Promoter Ahmet Oner is proud to present this heavyweight showdown in his hometown Tekirdag. “I expect a very close and exciting fight”, says Oner. “One thing is for sure: Both of these guys are a lot better than Wladimir’s last so called opponent Jean Marc Mormeck. I am not saying that these guys could beat Wladimir but if he ever faces seither one they would surely come to fight. Everybody who likes honest and good heavyweight boxing better than lasershows and gigantic walk-ins should watch this fight!”