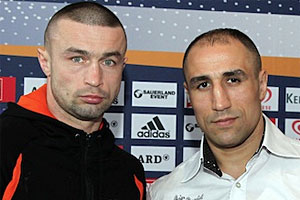 It was officially announced today that WBO Europe super middleweight champion Arthur Abraham (33-3, 27 KOs) will take on Piotr Wilczewski (30-2, 10 KOs) at the Sparkassen-Arena in Kiel, Germany on March 31. “It´s all or nothing for Arthur,“ promoter Kalle Sauerland said at a press conference in Kiel. “He needs to beat Wilczewski to put himself back in a position to fight for the world title.” Abraham, who celebrated a successful return in January when he knocked out Pablo Farias in the fifth round, knows it´s make or break. “I know there is a lot of pressure but I will make a good fight and beat Wilczewski,” he stated. “I have high goals. I want to be world champion again.” Added coach Ulli Wegner: “We don´t fight any push-overs or easy opponents. It´s very simple, I expect a good fight from Arthur and a victory.” Said Wilczewski, a former European Super-Middleweight Champion: “I´m coming here to win. Arthur is a strong guy but I will defeat him.”