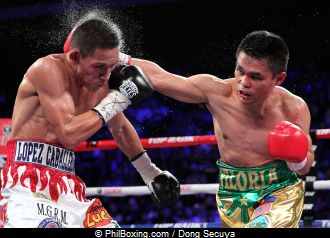 MACAU – Juan Francisco ‘El Gallo’ Estrada did not waste his second chance at a world title. The 22 year old from Hermosillo, Sonora, Mexico took Brian Viloria’s best punches and came back for more. The Hawaiian Punch tried to control the tempo of the fight with his jab but Estrada easily countered with hard hooks to the body and head. It was not just Estrada’s long reach that posed problems for Viloria but his toughness as well. Going into the sixth, with the crowd cheering for him, Viloria mixed his shots to the body and head. But Estrada proved resilient. Blood dripped from his nose in the seventh but Estrada continued to make Viloria’s stay inside the ring a living hell.

For every power punch Viloria threw, Estrada fired with more of his own. Lumps formed on Viloria’s face and Estrada seemed the fresher fighter going into the latter third of the fight. Viloria managed to corner and nail the Mexican but it was Viloria who was bleeding and reeling in the championship rounds.

Estrada will now defend his WBO belt against Milan Melindo of the Philippines sometime in August.

Viloria vs Estrada was held at the Cotai Arena of Macau’s Venetian Hotel and promoted by Top Rank.

In the post-fight press conference, Viloria sported bandages on both of his eyebrows but still manage to make a joke about his appearance and apologized that he ‘looked different’ compared to when he arrived. Viloria apologized to the Filipino boxing fans for not retaining his belts but vowed to once again make a comeback and requested a rematch from Estrada.

Estrada dedicated his win to his mother and aunt. He said that “I was a nobody before this fight. Now I am starting my real career.” Estrada had previously lost a unanimous decision to Roman Gonzales in his attempt to wrest the WBA light flyweight title.