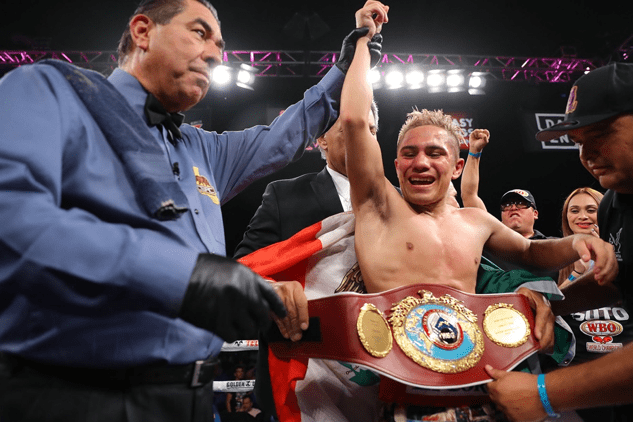 INDIO, CALIF.: Soto vs. Heno was a 12-round fight for the WBO Junior Flyweight World Title presented by Golden Boy in association with Zanfer Promotions.

Elwin “La Pulga” Soto (16-1, 11 KOs) of Mexicali, Mexico made the first successful defense of his WBO Jr. Flyweight World Title against Filipino contender Edward “The Heneral Fighting” Heno (14-1-5, 5 KOs) via 12-round unanimous decision in the main event of the Oct. 24 edition Thursday Night Fights at Fantasy Springs Casino in Indio, Calif. Soto won with scores of 114-113, 115-112 and 115-112. The event was streamed live on DAZN, RingTV.com and on Facebook Watch via the Golden Boy Fight Night Page. The series is also available on regional sports networks around the nation.

“I felt I need to throw more punches,” said Elwin Soto. “I won the early rounds, and I won the later rounds. But there were some rounds in the middle where he beat me. Either way, I won the fight, and I’m ready for anyone. I just want to keep fighting, no matter who it is.”

In the co-main event, Angel “Tito” Acosta (21-2, 21 KOs) of San Juan, Puerto Rico made his debut at 112 pounds via fifth-round knockout against Raymond Tabugon (22-11-1, 11 KOs) of General Santos, Philippines for the vacant WBO International Flyweight Title. The fight was stopped at 1:02 of the aforementioned fifth round of a scheduled 10-round bout.

“I felt strong in my first fight at 112 pounds,” said Angel Acosta. “I now want to fight against the best fighters in this new weight class. With this title, I’m now ranked in the top five, so I want any of the top fighters.”