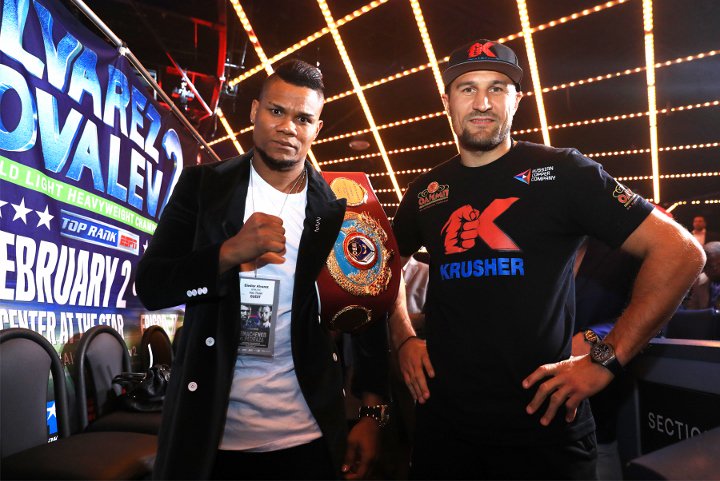 WBO light heavyweight champion Eleider Alvarez is planning to map out a pure beating in the upcoming rematch with Sergey Kovalev.

Last August in Atlantic City, Alvarez (24-0, 12 KOs) pulled off a shocker when he knocked out Kovalev in to capture the WBO crown.

The two will collide in a rematch on February 2nd, in Frisco, Texas.

Alvarez has been fired up for the rematch, because Kovalev and his handlers have been claiming that Alvarez got saved in the first outing – by way of a “lucky” punch.

“My first motivation is to keep my belt,” said Alvarez to The Montreal Journal.

“The second is to prove to Kovalev that the result of the first fight was not an accident as he’s claimed on social networks since August 4. I’m going to make sure there’s a second accident in our second fight.”

Alvarez is also not paying any attention to the recent headlines, where Kovalev is under legal fire for allegedly striking a woman several months ago.

“There are people who have made me aware of this case, but everything about Kovalev does not interest me. It belongs to him. I act as if I didn’t hear anything about it and I’m only focused on my fight,” Alvarez said.

Alvarez has trained even harder to make a bigger statement this time.

“It was harder than it was for the first fight against Kovalev,” Alvarez admitted.

“I trained even harder. Before I left for Colombia, I was able to make corrections that will be useful to me on Saturday. I feel better in my body. In terms of my physical preparation, I did not have to start from scratch. I still felt the positive effects of my first camp in Bogota.”