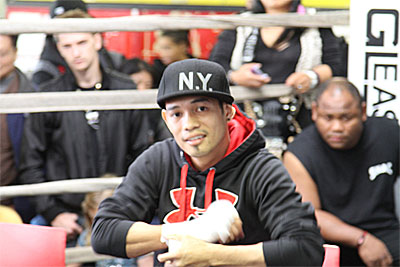 All signs point to new WBO junior featherweight titlist Nonito Donaire fighting Mexico’s Jorge Arce next, as the Filipino’s manager confirmed the news along with a tentative accord with WBC 122-pound boss Toshiaki Nishioka of Japan afterward.

“Arce is next,” Cameron Dunkin told Philippine News’ Truth Esguerra. “We have an agreement already, and he’s got to fight Arce. And we have an agreement in principle with the Japanese guy (Nishioka), so he’s got fights ahead of him.  After that we’ll look at [WBA champ Guillermo] Rigondeaux, of course.”

Donaire hurt his left hand early in his split decision win last Saturday over Puerto Rico’s Wilfredo Vazquez Jr., and was scheduled to see a physician on Monday to determine the extent of the injury.

“He’s going to be back soon,” Dunkin added. “Hopefully this hand’s not a big deal, and we see him back in the ring in April or something, I hope.”

Ryan Maquiñana writes a weekly column for Comcast SportsNet Bay Area (CSNBayArea.com). He’s also a member of the Boxing Writers Association of America and Ring Magazine’s Ratings Panel. E-mail him at rmaquinana@gmail.com , check out his blog at www.maqdown.com , or follow him on Twitter: @RMaq28.