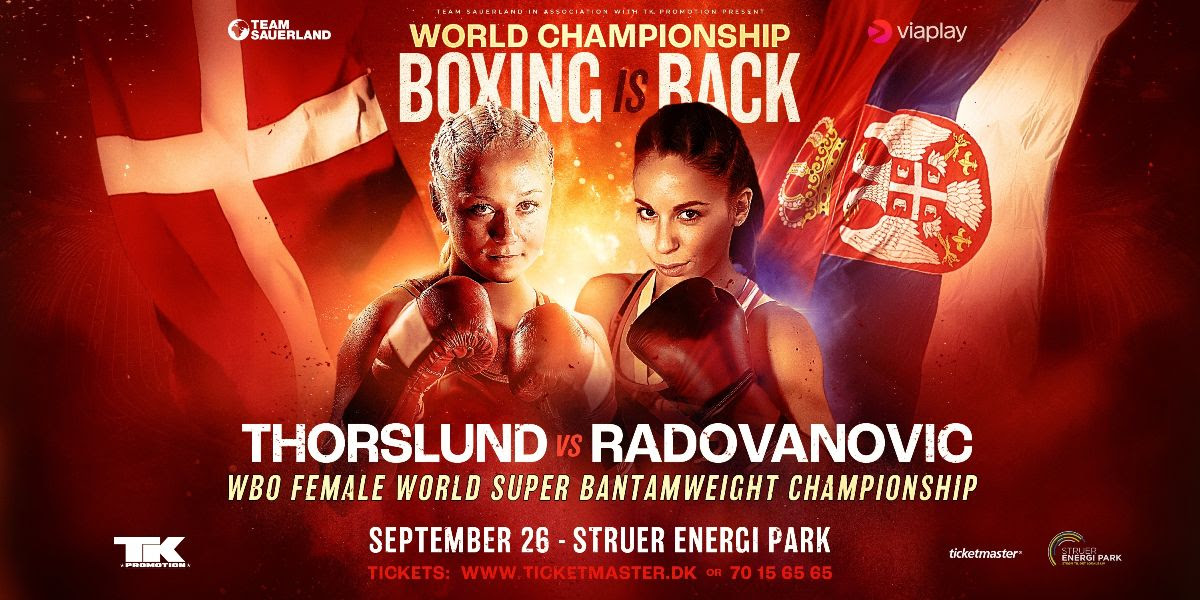 Thorslund reunites with promoter Team Sauerland to deliver another exciting night of boxing in Struer. The Danish star will be headlining her hometown arena for the fifth time as she makes a third defence of the WBO title she claimed with a unanimous points win over Jessica Arreguin Munoz in 2018.

“I am happy to be working with Team Sauerland again. The cooperation works really fine. It gives me some peace of mind in the build up to the fight, as I know they know what they are doing, so I just have to concentrate on boxing.

“The pandemic put an end to me being able to fight, but my motivation hasn’t been affected. It’s the same as it was before and I’m 100% motivated. People can expect a top tuned Dina on September 26th. I have been training and waiting a long time for this fight, so I expect to be sharper than ever.”

Thorslund can expect a tough test as she returns to the ring for the first time following her points victory over April Adams in June 2019. Her opponent Radovanovic is an experienced contender. The 28-year-old Serbian is a former IBO World Champion, who has also fought twice for WBC honours.

“I’m very excited to face Dina,” said a confident Radovanovic. “I’ve watched a few of her fights and it seems that we have a similar temperament. She is a strong fighter and I believe the fight will be very attractive for the audience.

“I’ve had several title fights. They’ve always been exceptional and I have gained a lot of experience from each one, which I will use to my advantage. It’s nothing new to me to fight away from home in my opponent’s country. I love it! It’s what I’m looking forward to. I believe the Danish fans will be in for a surprise.”

“We’re delighted to be bringing boxing back to Denmark,” said promoter Nisse Sauerland. “We’re happy to be working with Dina once again, and excited to return to Struer for the fifth time, where we will be working with TK Promotion to ensure another spectacular night of boxing at the Struer Energi Park.

“In light of the Covid-19 pandemic, we will of course be taking all necessary precautions to ensure the safety of spectators, fighters and officials. We will be working closely with the Danish Professional Boxing Federation, and will continue to follow the latest guidance and advice from Danish authorities.”

Ticket details for Dina Thorslund vs. Nina Radovanovic will be shared in the coming weeks. Sign up to Ticket Alerts for priority booking.