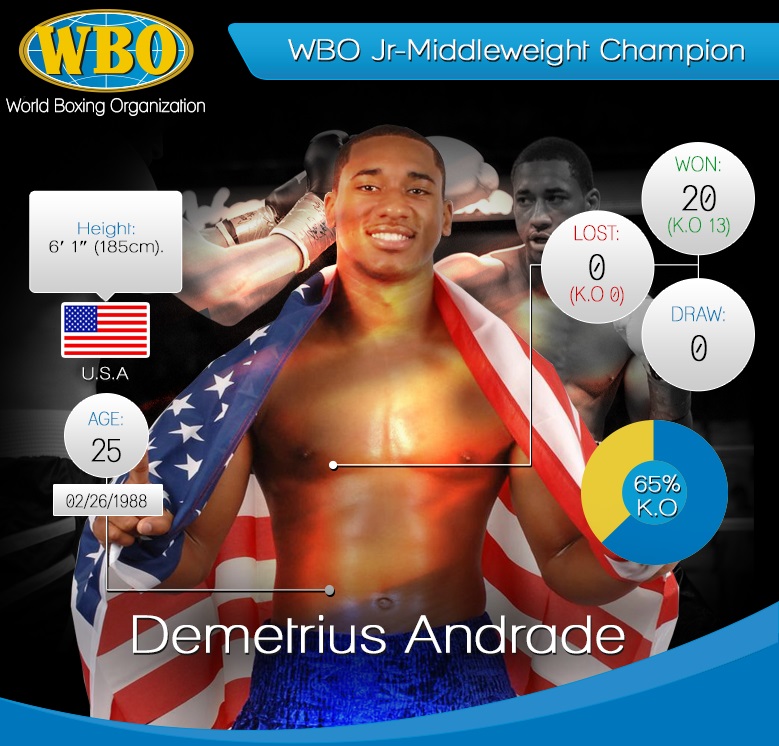 As the focus this week will shift to the middleweight division, activity just six pounds south will pick up next week, also in New York as WBO junior middleweight title holder Demetrius Andrade comes to Brooklyn to defend his belt in an HBO-televised co-feature at the Barclays Center.

Andrade (20-0, 13 KO’s) will be making the inaugural defense of the title he won last year from Vanes Martirosyan against little-known Brian Rose.  Despite the low-profile of his opponent (or, more likely, because of it) Andrade is in full promotional mode less than 14 days before his Big Apple debut.

“I’m just going to go ahead and do what I’ve been doing,” he recently told BoxingScene in an exclusive interview. “That includes boxing, having fun, sticking to my game plan and tools and utilizing everything I’ve been working on to get me this far.  You know, whatever he brings he brings.  I can adjust in the ring.  I feel like I’m in great shape and I’m ready to put on a great display June 14.”

The Providence-born 26-year-old also said he is looking forward to fighting in Brooklyn.  “I’m excited.  It’s close to my home.  I’m from the New England area.  You know, that’s part of my region and my home is not too far from there,” he reasoned.  “I grew up there, fought there.  It’s going to be great to fight at the Barclays Center because it’s going to be like the new Madison Square Garden for boxing.”

Andrade, a former 2008 Olympian, has been training in Atlanta, Georgia for approximately eight weeks for the Rose fight. However, he has only fought twice in the last year and half and consequently said he is looking to increase the activity level, especially now that he has a belt.

“Definitely,” he stated, “the more fights, the better.  These people who are challenging Demetrius, I’m ready to put it up.  I definitely want to unify the division and give the people what they’re looking for.  I’m looking to unify the division, looking at trying to catch all the belts and just make a legacy at 154 and move up when the time’s ready.  The body knows when it’s time to move on so, you know, that’s eventually going to happen but right now I want to take over the ‘54 division.”

While the junior middleweight division may not be as chockfull of talent as it was earlier in the 2000’s, it’s still a decent division currently topped by ‘Canelo’ Alavarez and Erislandy Lara (that duo will do battle on July 12).  Andrade, though, sounded unconcerned.  “If you put me in the ring with both of them, I’ll beat both of them,” he said.  “I don’t really care who wins.  Hopefully I can get the winner of either one of them and put on a show.”

“I just appreciate everyone who supports me and follow my career,” he said.  “I’m looking to hopefully get a fight with Floyd Mayweather, as fast as possible.  If not, just carry the torch and keep bringing the excitement to boxing.”