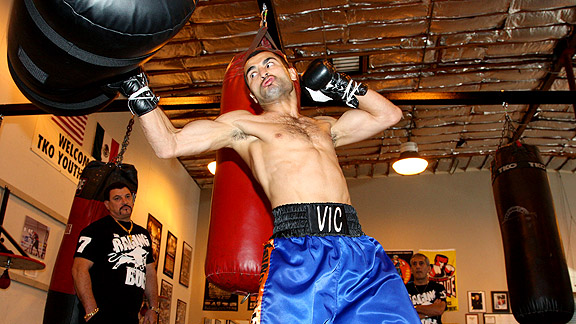 Vic Darchinyan is six years older and has five more losses on his record than he did the week before his first fight against Nonito Donaire.

The powerful southpaw from Armenia is still every bit as confident and defiant as he was before Donaire knocked him out in the fifth round of their July 2007 flyweight title fight in Bridgeport, Conn. Darchinyan predicted on a conference call Tuesday that he’ll knock out Donaire after exposing the former four-division champion during their rematch Saturday night in Corpus Christi, Texas (9:30 p.m. ET/PT).

The 37-year-old Darchinyan was 28-0, including 22 knockouts, when he attempted to defend his IBF flyweight title against Donaire. The scheduled 12-round fight was even on two scorecards entering the fifth round, when Donaire drilled Darchinyan with a left hook that knocked down Darchinyan for the first time as an amateur or a pro.

Darchinyan (39-5-1, 28 KOs) said Tuesday he didn’t know how to deal with the knockdown and that inexperience cost him because he attempted to get up too quickly, only to fall down again, face-first into the ropes. Referee Eddie Claudio stopped the fight at 1:38 of the fifth, after Darchinyan fell a second time.

The former flyweight and super flyweight champion has chased a rematch with Donaire ever since the night that changed the careers of both boxers. Now that he finally has secured that second shot at the 30-year-old Donaire (31-2, 20 KOs), who went on to become a star, Darchinyan promised he won’t waste it.