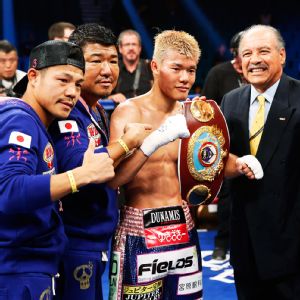 The WBO laid down the law this week and, believe it or not, this is a rare occasion where I wholeheartedly endorse what a sanctioning organization has done.

Bantamweight titleholders Tomoki Kameda (31-0, 19 KOs), 23, of Japan, and Jamie McDonnell (25-2-1, 12 KOs), 29, of England, are scheduled to meet in what was supposed to be a title unification bout on May 9 on a CBS-televised “Premier Boxing Champions” card in Hidalgo, Texas. The bout is the co-feature on the show headlined by the Omar Figueroa-Ricky Burns junior welterweight fight.

However, because McDonnell holds a secondary title — the WBA’s “regular” belt — the WBO formally refused to sanction the fight as a unification match for a variety of reasons it detailed in its ruling and a letter sent to Kameda.

In the letter, the WBO outlined its rules pertaining to unification bouts and concluded with this:

“The WBO world championship committee will not authorize your proposed bout with Jamie McDonnell as a unification contest, as it is our position not to recognize the ‘secondary titlists’ of organizations that opt to have more than one champion per division — as is the case with the WBA, which has Juan Carlos Payano as its so-called ‘super champion’ in the bantamweight division and Yonfrez Parejo as its ‘interim’ titleholder.

“Simply put, the WBO only recognizes the highest titleholder of other sanctioning organizations as legitimate champion for unification purposes (in this case Payano). In addition to this, the WBO World Championship Committee may only sanction contenders that are rated within the top 15 of the WBO. In this case, McDonnell does not meet the criteria of the WBO ratings committee and is not rated.

“Finally, please note that should you decide to participate of the aforementioned bout in spite of this warning and without our authorization, this committee may order you to show cause as to why the WBO bantamweight championship of the world should not be declared vacant or, in the alternative, it may declare the title vacant without further hearing you.”

That is logical, which is not a word often used when discussing sanctioning bodies. There are already too many titleholders with the WBA being, by far, the worst offender.

If Kameda wants to unify 118-pound titles, great. That means fighting Payano if he wants a WBA title, not a secondary titleholder who is technically the mandatory challenger for Payano.

Common sense and a sanctioning body in the same sentence? Next you’re going to tell me that the Floyd Mayweather-Manny Pacquiao fight was made.