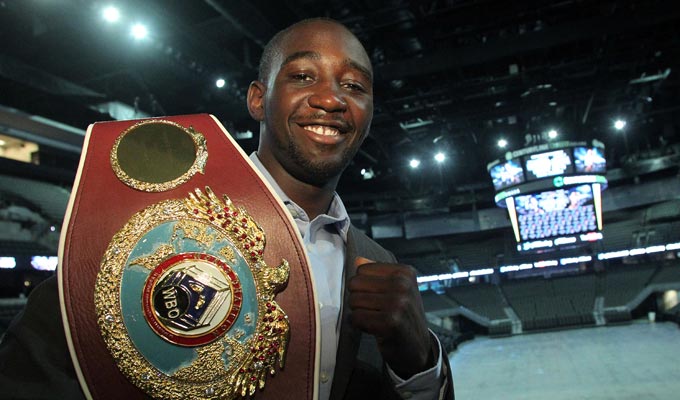 Crawford: You will hear the words ‘and STILL’ Fight week has arrived and WBO lightweight world champion Terence “Bud” Crawford (23-0, 16 KOs), of Omaha, Nebraska, took time out of his busy training routine to discuss his much talked about world title defense against fellow undefeated former champion and Olympic gold medalist Yuriorkis Gamboa (23-0, 16 KOs) live on HBO Boxing After Dark this Saturday night at the CenturyLink Center located in Omaha, Nebraska. The event is being promoted by Top Rank, in association with SMS Promotions, PS4 and Tecate.

Hello champ, thank you for taking time out of your schedule and supporting the #1 boxing website, www.fightnews.com. How is training camp going?

Camp went real well as always. I have a great team. They have been there since day one. We put in the work necessary to compete at this level. Colorado Springs is perfect for conditioning and we had great sparring as well. We did everything we normally do but just more of it. We are taking things to the next level.

On June 28th, Omaha, Nebraska and Terence Crawford will be making new history in the boxing world. For instance, first televised HBO Boxing After Dark card in Nebraska, Top Rank’s first appearance in Nebraska, and the first major boxing card at the CenturyLink Center. How does it feel to be part of Nebraska history?

Wow, I mean it’s a real honor. This is home. This is where it all started. I’m truly blessed and thankful to all my supporters.

Champ, your popularity has soared since becoming a household name and capturing the WBO lightweight title. You received the key to the city, appeared on several sports talk shows and gave back to the community by talking to students throughout the Omaha Public Schools district. How has the fame changed you inside and outside the ring?

I feel like it hasn’t really changed me in terms of who I am. I feel like this is my responsibility as a champion. Before the Burns fight, I promised the kids/students that I would be back but that I would be bringing the belt with me. If anything, the added attention makes me train even harder. I love my city and on June 28th, I will fight my heart out.

Since you mentioned the Burns fight, how would you rate your performance?

It was a great night, we got the job done and that’s what counts. However, I felt like I could have done better. I give my performance a B. I adjusted and took control of the fight after a few rounds but made a few mistakes that I will correct heading into this fight with Gamboa.

At the press conference to announce the fight, most boxing insiders were surprised to see you be more vocal and outspoken. I believe it started after hearing Gamboa boast about his accomplishments, including being a former Olympic Gold Medalist, and three-time world champion. Any bad blood with Team Gamboa or is this simply a champion coming out of his shadow?

Crawford: No, there is no bad blood at least on our end. I just want him to know that this is my city, he’s the challenger. Also, this isn’t the amateurs and everyone else he beat in the pros weren’t Terence Crawford.

I have noticed some back and forth comments from both camps on social media. SMS Promotions, aka a 50 Cent, Promoter of Gamboa, boldy predicted that his fighter will stop you in four rounds, while Gamboa himself stated that he faced the better opposition in his career and that his combination of power/speed will be the deciding factor. How would you like to respond to Team Gamboa’s somewhat stern statements?

They can say all they want it doesn’t faze me. We will see what he can or can’t do. I know that I’m well prepared and I assume he will be as well. All that talk won’t matter, we are going to settle things in the ring.

You competed as an amateur at 132lbs and typically campaign between 135-140 lbs. However, Gamboa won gold as a flyweight and most of his key victories as a pro were at 126. Do you believe that your size and strength will be your biggest advantage?

We shall see. I mean… we have never fought before so we prepared for whatever he might bring to the table. I’m willing to do whatever it takes to get that “W.”

The old cliché in boxing is “styles make fights.” Why will Crawford vs Gamboa be a great fight?

Crawford: The fight is going to be explosive. It will be great because we are both undefeated as pro’s, both stellar amateur careers, and I truly believe both of us are elite fighters in the sport. Find the best-fitting & stylish women’s swim tops, bottoms & bikinis available in plus sizes. Shop women’s plus size swimwear & bathing suits online at Swimwearlux.com. Discover women’s plus size swimwear and beachwear at Swimwearlux – Pick from a range of tummy control swimwear and swimsuits styles and colors. What kind of plus-size bathing suit are you looking for? Since swim styles and patterns are always changing with each season, you’ll always find new styles. #1 selection of plus size Bikinis & Tankinis at Swimwearlux. #plus #size #swimwear #swimwearlux

Ok champ, we are almost finished and then you can get back to training. At a sold crowd, live on HBO boxing, Omaha Nebraska fans are on their feet in complete anticipation chants of BUD… BUD… BUD… begin to surface, the stage is set, Michael Buffer grabs the mic as his voice blisters’ the air with “Omaha? Are you ready? Let’s Get Ready to Rumble!!!” Please finish the ending to the story.

You will hear the words “and STILL,” followed by “WBO LIGHTWEIGHT CHAMPION OF THE WORLD, TERENCE “BUD” CRAWFORD.”