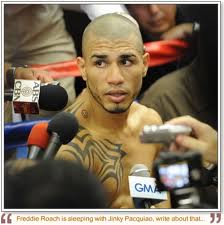 MANILA, Philippines – Miguel Cotto has chosen WBA super-welterweight champion Austin Trout, and not Manny Pacquiao, as his opponent on Dec. 1 at the Madison Square Garden.

Since Cotto is fighting on Dec. 1, Pacquiao cannot afford to go head-on with the heavy-handed Puerto Rican who has a very solid fan base and a great pay-per-view history.

Bob Arum, having a real hard time making Pacquiao decide on his next fight, has come up with a new date for the Filipino superstar’s return to the ring. It’s Dec. 8.

With Cotto fading out of the picture, Pacquiao is back with two choices.

He can fight Bradley and try to regain the title that was snatched from him via a highly controversial and highly questionable decision by the judges at the MGM Grand.

But if Pacquiao takes on Bradley, he will have to settle for less, especially in the pay-per-view side. Bradley has very little following, even if he is now the champion.

Marquez, on the other hand, offers everything Pacquiao wants – a fighter who doesn’t back out, and one that can provide the pay-per-view numbers.

A fourth fight between Marquez and Pacquiao could easily fetch 1.3 million pay-per-view buys. But it’s a risky one.

In all their three fights, Marquez came close to beating Pacquiao, during a draw in 2004 and two razor-sharp decisions in 2008 and 2011. The law of averages may finally catch up on Pacquiao.

By facing Marquez, Pacquiao will also put his dream of finally facing Floyd Mayweather Jr. at risk. If he fails to impress against Marquez, or worse, if he loses to Marquez, the super-fight may go down the drain.

“Pacquiao can earn more against Marquez but it’s risky. If he really wants to fight Mayweather next year, he should pick Bradley. Go for the easy fight,” Peñalosa added.