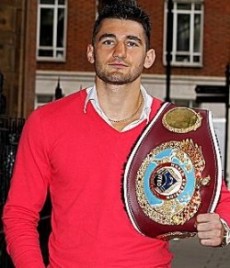 If you saw WBO light heavyweight champion Nathan Cleverly’s close 12 round majority decision win over challenger Tony Bellew (16-1, 10 KO’s) last Saturday night you would think the last thing that Cleverly needs to be doing is trying to move forward to fight WBC light heavyweight champion Chad Dawson or 46-year-old Bernard Hopkins. But that’s exactly what the 24-year-old Cleverly wants to do.

I think he’s stupid for wanting this, because I think he didn’t even prove that he’s better than Bellew last weekend. I scored the fight a draw and that was after giving Cleverly a couple of mercy rounds. I really think he should have lost, but knowing how popular he is in the UK, I figured he would be given rounds that were close even if Bellew appeared to do the better work. The judges scored it 117-112, 114-114 and 116-113. The 117-112 score was just plain strange because there was no way on earth that Cleverly won by those wide of score.

Instead of looking to fight Dawson or Hopkins, and get dominated, Cleverly needs to give Bellew a rematch but with a whole different crew of judges apart from the one that scored it 114-114. I think Cleverly needs to show that he’s better than Bellew before he can move on to bigger and better things like Dawson or Hopkins. And right now Cleverly and Bellew are about equal. That’s just the reality of it. Cleverly can move on if he wants to but he looks bad because he didn’t show that he was better than Bellew.

Hopkins and Dawson aren’t going to waste time fighting Cleverly. That’s not going to happen. Dawson wants to fight a rematch against Jean Pascal, while Hopkins is injured from a bad shoulder injury. Who knows how long it will take for that injury to heal, but I don’t think he’ll want to fight a less than popular guy like Cleverly in his next fight in the U.S. Hopkins won’t travel to England, that’s the only place that a Cleverly vs. Hopkins fight has any significance. U.S fans won’t buy that fight, especially after the PPV fiasco of the Hopkins-Dawson fight.

Cleverly said this to ringtv: “I think Shumenov would be good next step for me. He’s only had about 13 fights and is WBA champion. Or there’s Tavoris Cloud, the IBF champion, who is a good fighter. There’d both be unification fights. If a fight with Hopkins or Dawson came along I would take it. Whether or not I’m ready, I don’t know.”

You’re not ready, Cleverly; take it from me. I think Cloud would knock Cleverly out with his high work rate and the same with Shumenov. With his poor defense, Cleverly would be a sitting duck against Cloud and Shumenov.
I hate to say it but Cleverly pretty much found his upper level in the Bellew fight and he’s reached his ceiling.